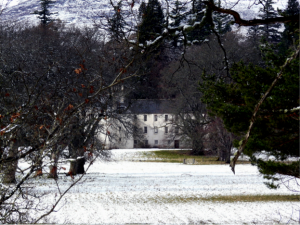 The Doune, Rothiemurchus, ‘Highland Home’ of Elizabeth Grant, with all the comforts and luxuries a Highland Gentleman and his family required (Wikimedia Commons).

Increasingly, research about travel and tourism has been concerned with identity. Many diasporic Scots use visits ‘home’ to Scotland as a way to cultivate, perform, and maintain their Scottish identity. My research has focussed on elite Highland women from the eighteenth and nineteenth centuries. It questions how, despite their absence from Scotland for the majority of their lives, they identified as Scottish and more particularly, Highland. Visits to Scotland had the potential to play an important role for these women in displaying their varied Scottish identities. The activities and culture the women engaged in while visiting help to reveal the nature of that identity. While often the women felt they were engaging with Highland life and acting out their identity, these experiences were very much shaped by the broader factors of their lives as ‘British’ elite women, and thus at times appear rather romanticised.

Four women from varying backgrounds were chosen as case studies for this research. Lady Louisa Stuart (1757-1851) was the youngest daughter of the infamous 3rd Earl of Bute. She grew up in England and it was not until she had independence as an adult that she began to visit Scotland on a regular basis. Even then, Lady Louisa never returned to the family seat. Next, Georgina, Duchess of Bedford (1781-1853), daughter of the 5th Duke of Gordon. Georgina was born and raised in the Highlands but, as a result of her aristocratic status, socialised in London from a young age. Her marriage to the Duke of Bedford consolidated her life in England, yet she continued almost annual visits to the Badenoch region until her death. The famed Elizabeth Grant (1797-1886), notable for her writings as a nineteenth century Highland woman, including ‘Memoirs of a Highland Lady’, came from the same region. Born in Edinburgh, Grant lived in London, continuing to visit Rothiemurchus for seasonal visits, before returning to Rothiemurchus and Edinburgh to live in 1812. She left Scotland permanently, to return only as a visitor, in 1827, when her family relocated to India where she met her Irish husband. Finally, Lady Aberdeen, daughter of Baron Tweedmouth also grew up in London. Annual trips to Glen Affric as a child helped to cement a powerful relationship with the Highlands, which she continued as an adult. While the experiences of these women do collectively provide an insight into how Scottish identity could be cultivated and performed by the increasingly absent Highland elite women through visits, overall, the extent to which this was done very much depended on their individual status. 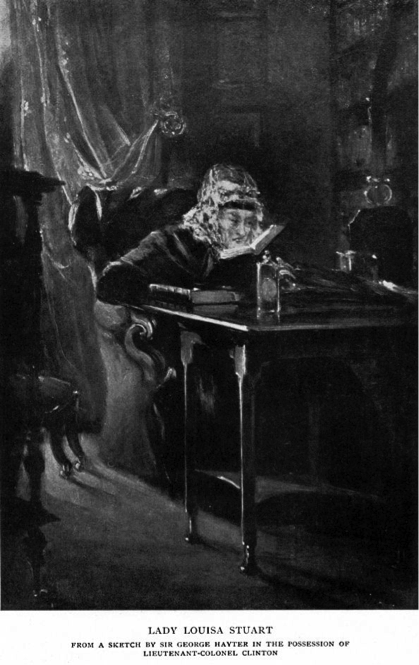 Like other visitors to Scotland, for these women, appreciation and exploration of the landscape was a key theme of visits. The romanticisation of Highland landscape in particular was an important factor in the growth of popularity of Scotland as a destination for travellers and tourists. The ability to appreciate this landscape was a particularly elite trait, found in the experiences of all four women but most obviously in Lady Louisa’s. To an extent, this made them outsiders, able to step back from the often harsh realities of survival in the Highlands. However, it also had the potential to help these women feel more Scottish. In the ways they engaged with the landscape – navigated the hills and rivers, and endured the outdoors better than others – Grant, Georgina, and Lady Aberdeen could cultivate a sense of belonging.

The material culture these women engage with also reveals much about their experiences of Scotland and their sense of identity. Some of the women were able to find pleasure in their interpretation of a simple Highland lifestyle. They abandoned the materiality of their everyday lives, possible due to concepts of the ‘noble savage’. In the most extreme case, Georgina visited small huts in the glen, some with turf rooves! However, it should be noted that although simple, these weren’t without comforts such as servants and a roaring fire to keep warm by, as well as plenty of food and entertainment. In contrast, Lady Louisa was not able to romanticise this lifestyle, and still viewed such homes as part of the poverty rife in Scotland during her lifetime. From Lady Louisa and Grant’s experiences we find that in reality, late eighteenth-century Scottish elite were making considerable effort to ‘improve’ their houses practically and aesthetically, to make them more luxurious and comfortable, according to wider British elite standards. House surroundings also changed considerably. Farm buildings and estate offices were moved out of sight, revealing how the ‘traditional’ role of the Highland laird’s house did not fit with new elite aesthetic principles. This shows how, by the end of the eighteenth century, many elite Highland women lived a life detached from their estates, as the experience of all four women reveal.

This is also reflected in their relationship with Highland clothing. While Georgina abandoned fashionable dress while staying in Badenoch, dressing in the local peasant fashion as a way to display her Highland identity, she was only able to do so because of her elevated social status. This was also a practice reserved for the Highlands. In contrast, Lady Louisa and Grant’s experiences reveal that the elite Highland woman’s aspirations to the fashionable continued while she was living in the Highlands, as well as the difficulties they faced in doing so. Grant’s adult wardrobe was made up of items sent from Glasgow and London. She wore the same dresses in Rothiemurchus as she did in Edinburgh in order to maintain the appearance of an elite woman. This attire, unsuitable for participating in household tasks, reveals how the Highland lady no longer engaged with industry on the estate. However, we do find change by the end of the nineteenth century. The kilt was an important way for Lady Aberdeen’s son to express his Scottish identity, an attire which was acceptable in wider British elite circles by this time, reflecting Scotland and the Highland’s changed place within Britain. Furthermore, as a child, Lady Aberdeen enjoyed weaving shawls while she was in the Highlands. This childhood hobby formed the basis of a real interest for Lady Aberdeen in Scottish craft industries. She was heavily involved in the promotion of such industries, and displayed products at exhibitions across the world. However, while to some extent this stemmed from and reflected her sense of Highland identity, it was also a factor of her role as an elite British woman of her time, influenced by Liberal politics, the Arts and Crafts Movement, and the Celtic Revival. 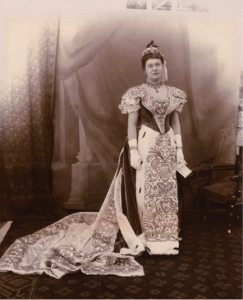 Lady Aberdeen, dressed in one of her famous ‘Celtic’, craft-inspired dresses. This was her way of engaging with ‘Highland’ material culture. (Wikimedia Commons)

Finally, music and dance had the potential to be particularly nationalistic for these women. It formed an important part of the entertainment for all four women during visits and could be used to perform their Highland identities. For all four women, music – Gaelic song in particular – and dance were closely associated with the Highland character. However, the extent to which they really understood the songs is debatable. Once again, we find a rather romanticised take on Highland life and culture which allowed Scots songs to be incorporated into the cult of sensibility. Furthermore, while these women enjoyed Scottish culture, they were limited as to when they could do so. For example, as a young girl at a party in London, Grant was reprimanded for dancing some Highland steps. These were not considered suitable for the occasion, obviously an activity reserved for when she was “at home in the Highlands”.

Overall, it may be argued that visits to Scotland and the Highlands did have the potential to play an important role in the performance of Scottish identity for these elite women once their lives pulled them away from their ‘native lands’. However, their experiences depended very much on their personal circumstances. Visits were overall a temporary manifestation of Scottish identities shaped by their outlook as members of the British elite.

Have a look at this interactive map for some more details on these women’s travels.