“…to this gentleman we are indebted for the earliest tours in Scotland, that are worth reading or preserving … he paved the way to that general taste for home travels, which has been so honourable to individuals, and advantageous to the public.”
Wlliam Fordyce Mavor, The British Tourists (1798) 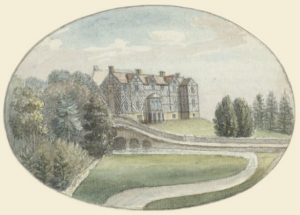 Thomas Pennant’s Welsh and Scottish tours were a major catalyst for the hundreds of tours that followed in their wake over the next half century. While some of these texts were published in the period, and became important works in their own right, many more have remained in manuscript in libraries and record offices the length and breadth of Britain. Our project begins to chart the influence of Pennant on subsequent travellers to Wales and Scotland by creating a searchable online corpus of previously unpublished tours. Some twenty-five of these have been transcribed, tagged and edited with introductions by Alex Deans and Elizabeth Edwards, and we continue to add more. They can be accessed here. For a general introductory essay by the editors see here.

e tours vary widely in length, itinerary, focus and style, so the selection for ‘Curious Travellers’ includes texts combining natural history, antiquarianism, literature, visual culture, history, aesthetics or politics in a variety of ways. The corpus as a whole is likely to transform our current understanding of domestic tourism in the period, in particular by giving a voice to many women travellers who did not find it appropriate or possible to publish their work at the time. The domestic tour was an extraordinarily successful genre, second only to novels and romances, but has been relatively little studied. Conventional views of the phenomenon argue that war with France closed continental Europe and sent would-be Grand Tourists on the domestic (or ‘petty’) tour instead. However, new work on eighteenth-century global travel, especially Pacific exploration, suggests that domestic travel writing was shaped by a wider set of influences than previously acknowledged, from ethnography to Enlightenment antiquarianism.

Our collection of new texts offers new insights into the role of home tourism in the construction of national histories and identities, both at a ‘four nations’ level, and in wider contexts. In considering how the selected tours represent contemporary and historical Britain, the project has also examined travellers’ engagement with vernacular Celtic cultures, including language, poetry and song, and considers how far their perceptions were influenced by contemporary ideas from science and art.

The edited tours can be accessed here.

Links to external resources and a list of works by team members on aspects of the domestic tour can be found here: