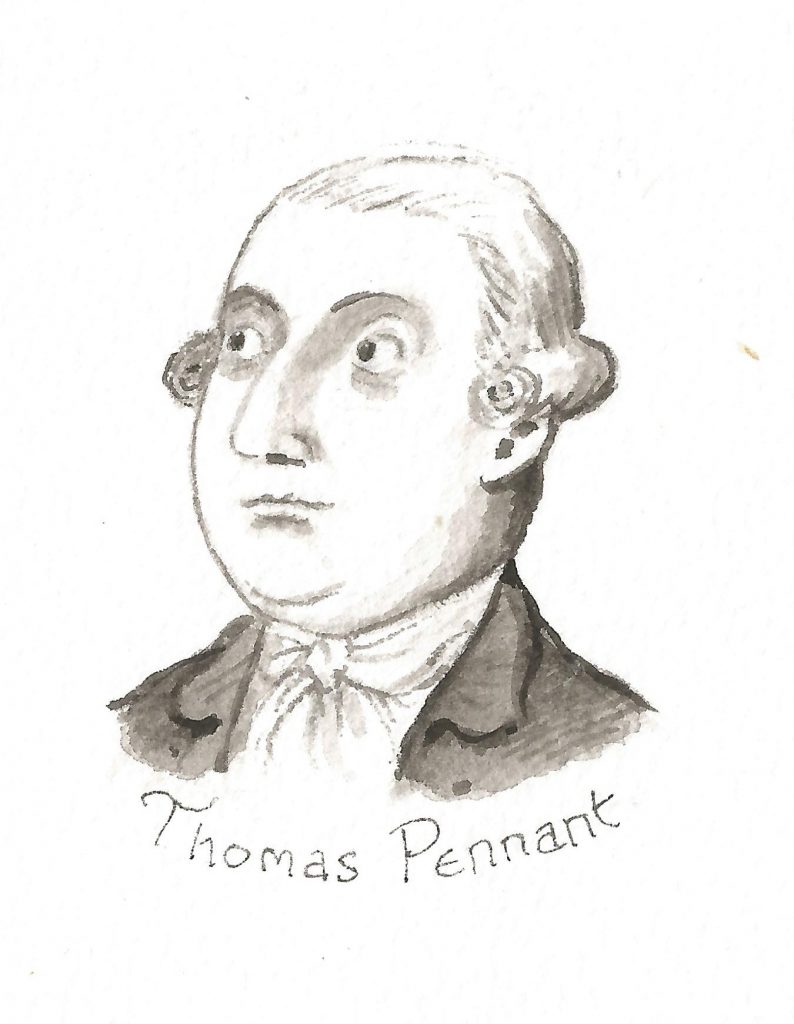 Being a meander around Pen Llŷn following Mr Pennant’s pen and Mr Griffith’s brush, beginning with an encounter with the Fairies at Penmorfa, and concluding amongst the Giants on Tre’r Ceiri.

“…Pwllheli, the best town in this country, and the magazine of good which supplies all this tract. It lies close on the shore, and has a tolerable harbour for vessels of about sixty tons. The entrance is by a high rock called the Gimlet, a mile from land, to which it is joined by a range of sand-hills.” 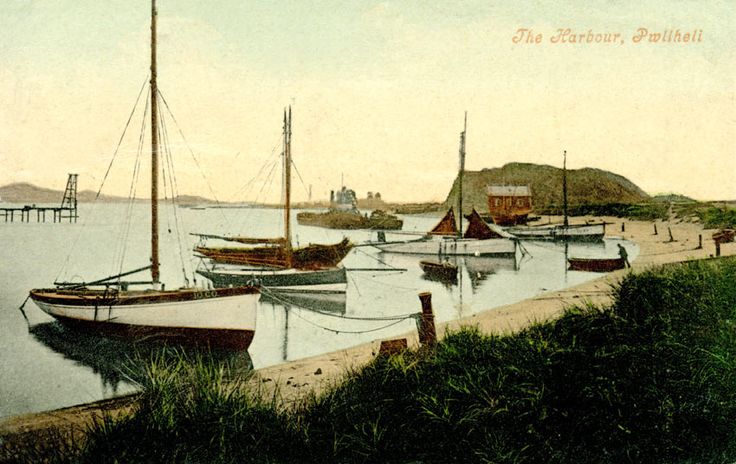 On his second tour of Wales in 1776, Thomas Pennant rode towards Pen Llŷn, following the coast, the sea lapping around his horse’s hooves, across the mouth of the Afon Erch, between the peaks of Crochan Berw, otherwise known as Gimblet Rock, along the beach, and into that best of towns, Pwllheli. He had ridden from Penmorfa where he had encountered Mary Bach, ‘a well proportioned fairy, of the height of three feet four,’ and her brother Dick, three feet eleven. It was as well that he was prepared for meeting fairies, for Pen Llŷn has more than its share. 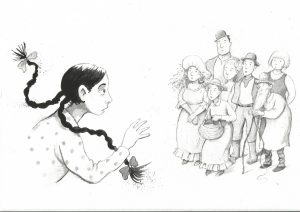 An encounter with the fairies

I rode into Pwllheli on Thursday 23rd June 2016, not on horseback, but on Arriva Trains Wales, having also encountered the fairies on the way. On the platform at Dyfi Junction, famous for being home to more nesting ospreys than people, I bumped into the amiable curator of the Coleridge in Wales Project, Richard Parry, who was touring the country on his collapsible bicycle. He was on his way to the RS Thomas Festival in Aberdaron, so inevitably we fell into exchanging stories, concluding with the tale of a man who believed he had encountered the fairies as a boy on Ynys Môn, only to meet them again as a young soldier in Dunkirk in 1918, when he realised they were not fairies, but itinerant migrant workers. When Richard leaves the train at Barmouth, I know I am about to enter a fairytale. 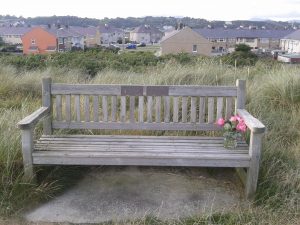 Flowers on a bench

At Pwllheli Station, I resolve to trace Pennant’s entry into Pen Llŷn over the ‘high rock called the Gimlet’. I walk out towards the sea, around the harbour where an eel has wrapped itself around a heron’s beak to avoid being swallowed, on through the council estate with its Bardic stone circle which doubles as goalposts, past a bench with a jar of flowers placed on it in memory of the names on its two plaques, past the Lifeboat House and the Boatyard, and on to the Gimblet Rock Holiday Park (Luxury Homes for Sale). 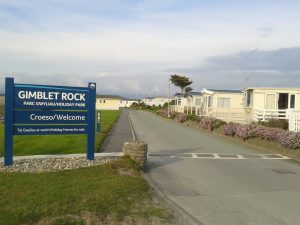 I walk around the back of the Park, turn and climb over the Rock to gain the full curious traveller experience. A couple are canoodling in the surrounding sand dunes, while speakers attached to an i-phone play selections from Cowbois Rhos Botwnnog. Well, alright, it probably isn’t Botwnnog’s finest, but everything on Pen Llŷn sounds like wild west Welsh alt-country if you’re in the mood. And the waves are dancing to the rhythm of ‘Ceffylau ar D’rannau.’ 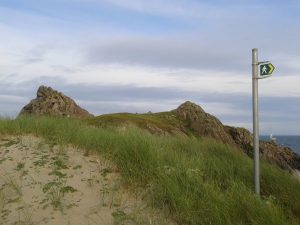 From the top of the Rock, the beach stretches out in a sublime curve towards Llanbedrog, the view that surely embraced Pennant as he entered the best damn town in the country. A memory returns, of the Golden Eagle who lived in one of the terraced houses on the Prom. It liked to sit on the gatepost hypnotising tourists with its yellow eye, lulling them into a false sense of cuteness, before it launched itself into the air with a terrifying explosion of feathers, and flew up and down the Prom followed by its owner’s large dog and a flock of small children. 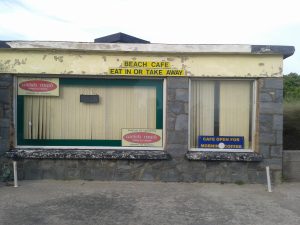 I walk back into Pwllheli past a derelict shop at the back of the prom. I bought my comics here, tales of The Inferior Five, the adventures of a group of incompetent superheroes who thought they could save the world, and often did, but only by accident. Which reminds me, it’s 23rd June, Referendum Day. The day Wales turned upside down. A hand-written sign in the locked door of the local cobblers reads, ‘It’s about Islamisation. Safeguard your children, your spouse, your culture, your life. Vote LEAVE.” 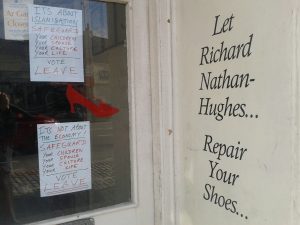 This is the town where everyone was a member of the Conservative Club, not because they voted Tory, but because it was the only place they could buy a drink when Pen Llŷn was Sabbath-dry. I walk around the Maes, past the site of the old slaughterhouse, and stand outside the Gwalia where my mam bought out-of-date cakes for a penny each at the end of the day’s trading. There is no sign of an Islamic invasion. Only pale arms and weathered faces, and a few white hairy legs. I follow the advice on the cobbler’s sign, and leave. 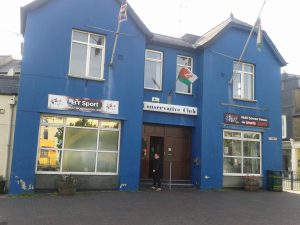 I catch the bus towards Aberdaron, which rattles along past the entrance to the Polish Village at Penrhos, where Saunders Lewis and friends protested in 1936 at the destruction of the sixteenth century house at Penyberth by setting fire to the newly built airfield, which is now a retirement home for the families of Polish airmen who were stationed there. The local women still wear the red and green of traditional dress. They are easily mistaken for fairies. There is a poster on the bus advertising a Bingo night in Trefor. Soon, Carn Fadryn floats into view. 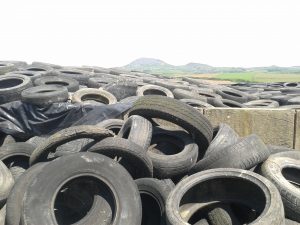 Before Pennant continued his journey to Aberdaron, he took a ride up Carn Fadryn, the hill that rises alone above the central Llyn landscape. The local boys called it ‘Y Tit’. They called a nearby hill ‘Brown Willie,’ such is the nature of folklore. Curiously, Pennant didn’t mention this, preferring to describe the remains of iron age houses, ‘cells, oblong, oval, or circular, once thatched, or covered from the inclemency of the weather.’ Neither did he mention the fairies who lived up there and frequently ‘borrowed’ things from the cottagers, and generally made mischief. Cow pats through letter boxes was a favourite. 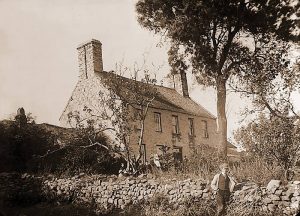 From the top of Carn Fadryn I can see Aberystwyth. On the hillside to the south-west is a farm called Trygarn, the childhood home of Moses Griffith. Moses was Pennant’s travelling companion, friend and servant, twenty three years his master’s junior, employed to draw and sketch the landscape and produce engravings for his mentor’s proposed edition of ‘Tours in Wales.’ He had lived at Pennant’s home at Whitford since 1769, supported and encouraged in a way that struggling artists today endlessly dream of. He was a fine natural history painter and scientific illustrator, good enough for his work to be catalogued and conserved in the National Library. And he had learned his art right here. For the first 22 years of his young life, Moses grew up overlooking Carn Fadryn. 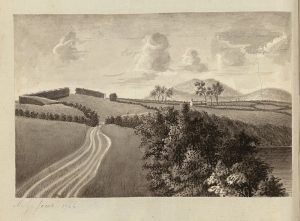 And this is where the storyteller in me takes over. Was Moses with Pennant on that day? He accompanied his benefactor on all his travels up to 1790, so unless he stayed behind in Pwllheli, the two men were travelling together. Chattering, eating bread and cheese, writing and sketching, looking south to Pembrokeshire, where twenty years later they would have seen the legendary French invasion of Fishguard being thwarted by Big Jemima. And what was their relationship? A Welsh Sancho Panza and Don Quixote, Boswell and Johnson, or Giraldus and the Archbishop? And did young Moses take his mentor to meet his poor family at Trygarn? 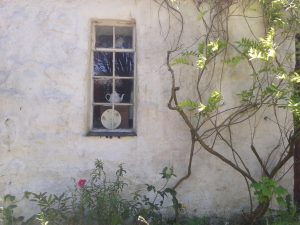 I keep to the high ground, and walk on to Bryncroes. There’s no one around so I call in the Polling Station. It’s empty save for the invigilator and the caretaker. The invigilator has heard of Moses, but can’t remember where from. The caretaker isn’t from the village, so only has a recent memory. We discuss the craziness of anyone voting Brexit when Pen Llŷn is sustained by EU money, though the invigilator suspects some will do exactly that. Turkeys voting for Christmas. He tells me the farmer at Trygarn is friendly, and directs me over the brow of the hill towards Sarn Meyllteyrn. 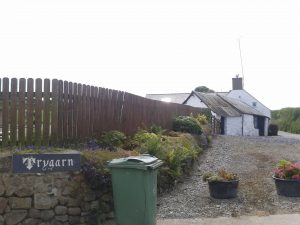 A renovated cottage stands at the entrance to Trygarn, which in Pennant’s day could easily have been a poorly thatched hovel like so many of the ruins on Pen Llŷn. The track to the farm is long and wide, to accommodate heavy agricultural machinery. Mountains of tyres hold down a sea of black polythene. The farmer explains that the house was built around 1700, an imposing building with three floors. Moses was said to have come from a poor family, but this is no cottage or hovel. 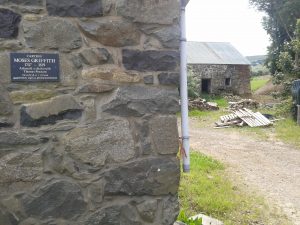 The farmer points to a small plaque on the side wall of the farmhouse, placed there in 2003 by Cyfeillion Llŷn in association with Grŵp Pennant, as Cymdeithas Thomas Pennant was then known. He says that no one has been to see it during the three years he’s been farming here. I ask if I could take some photos and do some drawing, and he nods his head, looks a little quizical, says he has work to do, and he leaves me to it. Best to keep a distance from itinerant arty types. 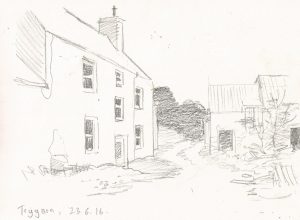 Moses looked out on Carn Fadryn from his window. He painted it in 1774 when he was 27. It’s called ‘Botwnnog Church and Free School,’ but the church in the foreground doesn’t look like the current church, which has a roundish steeple and no visible bell, rather than the rectangular steeple with a single arch and bell that Moses painted. It looks more like Eglwys Bryncroes, or the now demolished Eglwys Sarn Meyllteyrn. Or maybe Moses moved the landscape around to improve the design, as romantic painters had a tendency to do (witness Turner’s painting of Hafod). The same way that landowners diverted waterfalls to improve nature’s aesthetics, or storytellers move stories from one place to another.

All around Trygarn there are fairytales. Dic Aberdaron wandered through here with his pockets stuffed with books, harp strapped to his back, and a cat on his shoulder. A farm nearby was called ‘The house with the front door at the back,’ where the fairies lived unseen by the owner, an old man who kept a smelly muck heap by his doorstep. At Castell March to the south, the landscape refused to keep the secret of a vain King who had horse’s ears. To the west is Ynys Enlli with it’s Kings, Saints and Pirates, and Aberdaron famous now for its birdwatcher, poet and vicar. 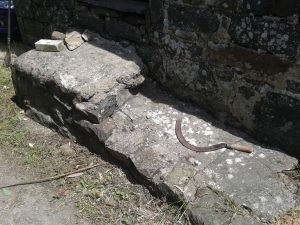 This landscape is built from layers of stories and images, smells and sounds. Faces peer inquisitively from beneath the water. Old characters walk the lanes as wraiths. Ghosts drive tractors. Bwgans pull the wheels off four-by-fours. Stone walls meander across the landscape, the wobbles indicating where the waller had a drop too much and met the fairies. There’s a man clearing the bracken. Dan, his name. He burns the gorse, too. There are dreams and memories everywhere. 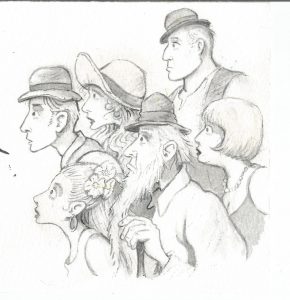 ‘He didn’t mention the fairies’

There we are. I’m on my way to Aberdaron, now. If you’d like to hear more tales, of the Kings of Bardsey, Elis Bach the Changeling farmer of Nant Gwrtheyrn, and how the entrance to the Otherworld lies beneath the golf course at Porthdynlleyn, then you are most cordially invited to Oriel Sycharth in Wrecsam on November 23rd at 6pm, to be tinctured further with the piety of place. 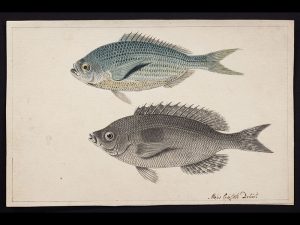