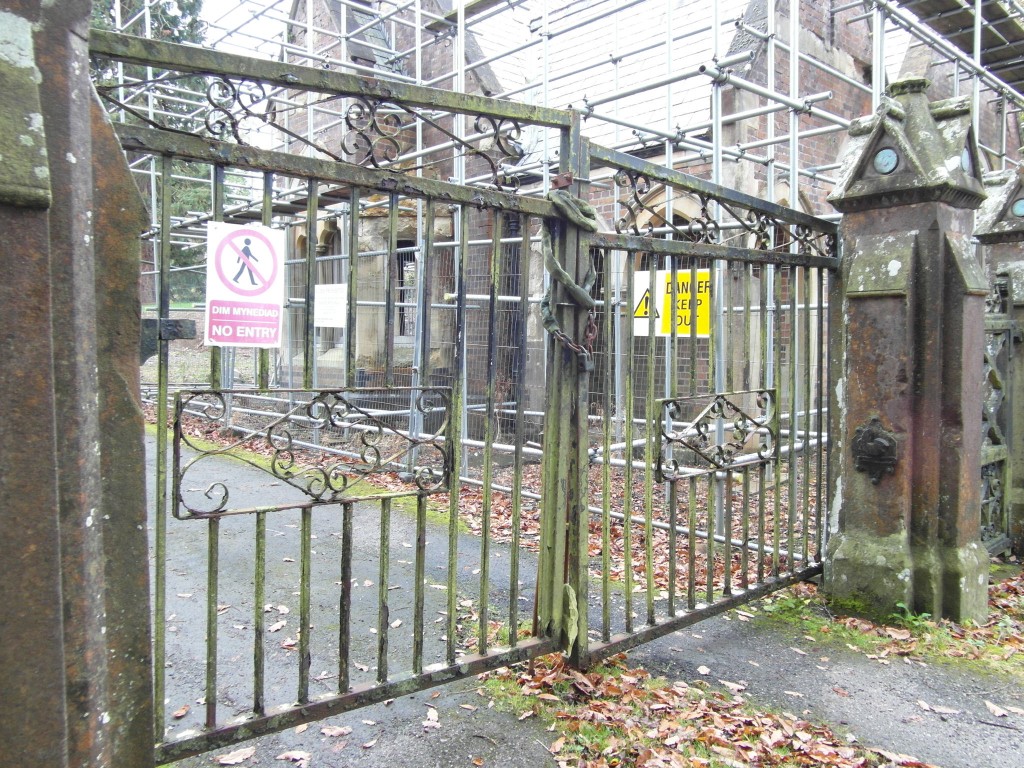 The plan for the next stage was to wander around Llangernyw towards “Havodunos” Hall (sic), and then try to identify the location of y Maes y Bendithion in Llanfair T.H. I did wonder about doing it all on foot, but changed my mind at the last minute and made a mad dash to catch the bus.

The problems associated with local public transport can be visualised as follows: imagine the top half of an old-fashioned cartwheel with “Llanvair Dolhaearn”, a.k.a. LlanfairTalhaearn/Talhaiarn/TH., at the hub (of course). Thomas Pennant was able to ride in leisurely fashion from bottom left, clockwise around the rim to Llangernyw at bottom right, and then back across the horizontal spoke into LlanfairTH. Nowadays, the roads go up and down the spokes, but not all round the rim. The bus route runs from the hub at LlanfairTH. out to Llansannan, half way back along a spoke, out again to touch the rim briefly at Llangernyw and then westwards into the wide blue yonder. It returns several hours later to do the journey in the opposite direction.   If you miss the last bus – at twelve minutes to two – you have to walk. Still, at least you have all afternoon to do it in. 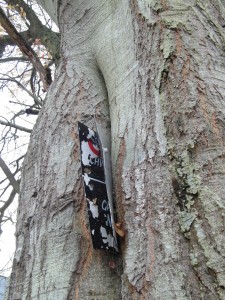 After reading Mary Ann and Liz’s experiences with signs about alpacas, I was more than usually aware of notices today, and pleased to see an oak tree in the Llangernyw Memorial Gardens in the process of eating its’ own sign. However, there was nothing about alpacas, and I crossed the road and walked along the footpath through someone’s vegetable garden to Hafodunos Hall.

The hall has had a chequered history, and was originally a monastery before becoming a private house. The seat of “Howel Lloyd Esq.” in Pennant’s time, it was rebuilt by Sir Gilbert Scott in the 1860s with the latest in High Victorian mod-cons and a substantial, landscaped garden. It passed from family home to Grade 1 Listed wreck in the 20th century after multiple changes of use and an attack of arson, but is now back in private hands. www.hafodunos-hall.co.uk The present hall is out of sight and definitely out of bounds, being seriously unsafe in parts, pending restoration. The gardens are also being restored to their Edwardian glory with terraces and walks and specimen trees. Today the autumn silence was punctured by the sound of leaf-blowers and general horticultural activity as the new owners improved the shining hour. Passing through the park on a public right of way, beside a tributary of the Elwy, I experienced a little taste of the Sublime above yet another horrid chasm. I hadn’t realised there were so many of them in the area. 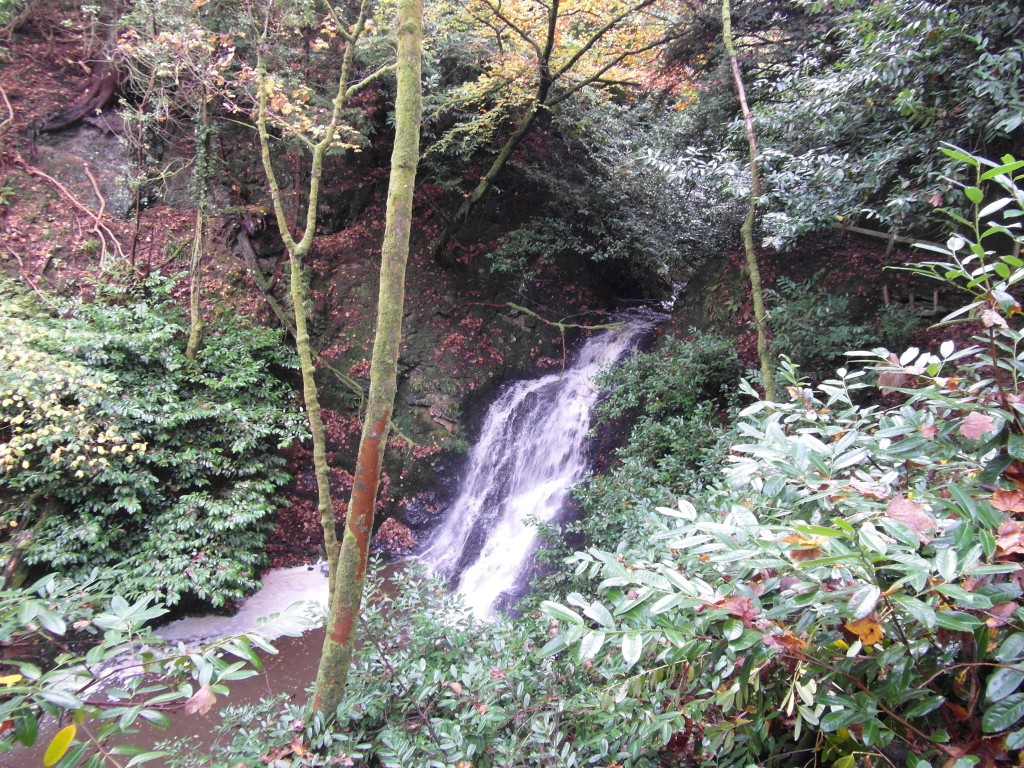 Yet another horrid chasm

I was looking forward to the home cooking in The Old Stag, but after ordering a half of Mŵs Piws ale (yes, really. Purple Moose Brewery, Llandudno) I discovered I had left most of my money at home along with the bus timetable. Still, as there are only two buses daily in each direction, it is fairly easy to remember the approximate times and I was picked up along the road home. After a late lunch out of the fridge I set out in the car to investigate the Maes y Bendithion problem.

Pennant records that, in the parish of “LlanfairDolhaearn… was one of the residences of Hedd Molwynog, descended from RODERIC THE GREAT king of all Wales. A large moat, called Yr Hen Llys, marks the place: as the field, styled Maes y Bendithion, does the spot wher(e) the poor received his alms”.

My problem is as follows: Henllys, just outside LlanfairTH. is now a farm, but has no obvious traces of a moat although it looks as though the River Elwy may have flowed close to, or even around it at one time. There is a massive motte and bailey up river but it’s called Hendre Isaf, and it’s just outside Llangernyw. It is said to be a genuine pre-conquest Welsh castle (perhaps this explains why Henry II camped his army at Llangernyw in 1150-something). The 1840 O.S. map confirms the names. Maes y Bendithion is not on the maps. I suppose the prosaic truth is that Henllys near Llanfair has lost its moat, but it would be nice to know for sure, and Hendre Isaf is very imposing even now it has a large farm built on it. And in the field by the castle mound …. alpacas (but no notices). 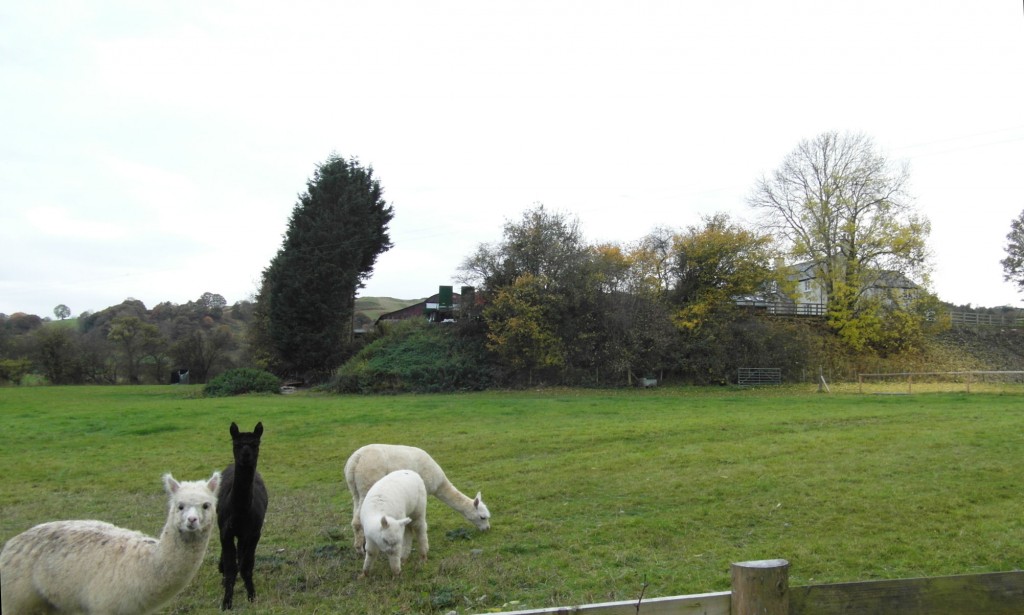 This afternoon, I called next door to ask my neighbour about Maes y Bendithion; he hadn’t heard of it, but, in a spiralling set of co-incidences, he has connections with Hafodunos, Hendre Isaf and Henllys. One side of his family is apparently descended from the Lloyds of Hafodunos, and his great great grandfather’s family actually lived at Hendre Isaf. He also has an old friend whose family comes from Henllys. The friend is a respected (retired) archivist. He will know about Maes y Bendithion. I hope.

Finally, a tale of the supernatural: my neighbour’s grandfather told him that Hendre Isaf is haunted by Roman soldiers, marching along the cwm. I wonder if Henry II’s army saw them at Llangernyw? I had no idea the valley had such strategic importance.