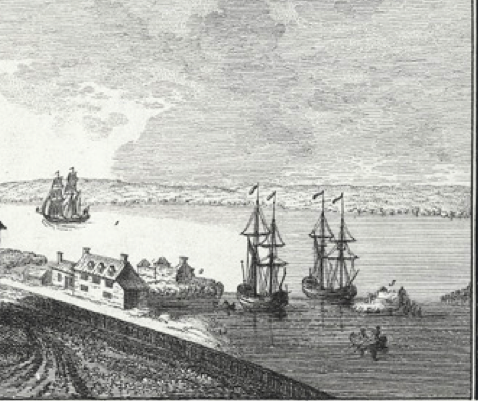 In 1754 Thomas Pennant, aged 28, heir to but not yet master of the estate at Downing, set off on a Tour of Ireland. The journal he kept of his travels, which would last from late June to late September and take him right around the island, is a sparse enough document: two small notebooks recording journeys between towns and villages, the nature of the country he rode through (usually on horseback) and–crucially–the people he met and stayed with. In his Literary Life written some 40 years later he would explain, with typical dry humour, why this tour never made it into print:

Such was the conviviality of the country, that my journal proved as maigre as my entertainment was gras, so it never was a dish fit to be offered to the public.

Maigre as it is, this account is thrilling to us now as an early example of the kind of raw, jotted text which Pennant subsequently worked up into his published tours; texts which, alas, do not survive (or exist only fragmentarily) for his Scottish and Welsh tours. As a document it is often enigmatic, frustrating, or impossible to decode: but those jotted notes bring us much closer to his actual experience of places and events as they happened than any of his published works. Besides the notebook, a handful of letters from Pennant survive from this summer, written to his aunt Elizabeth, and they provide valuable further insights. 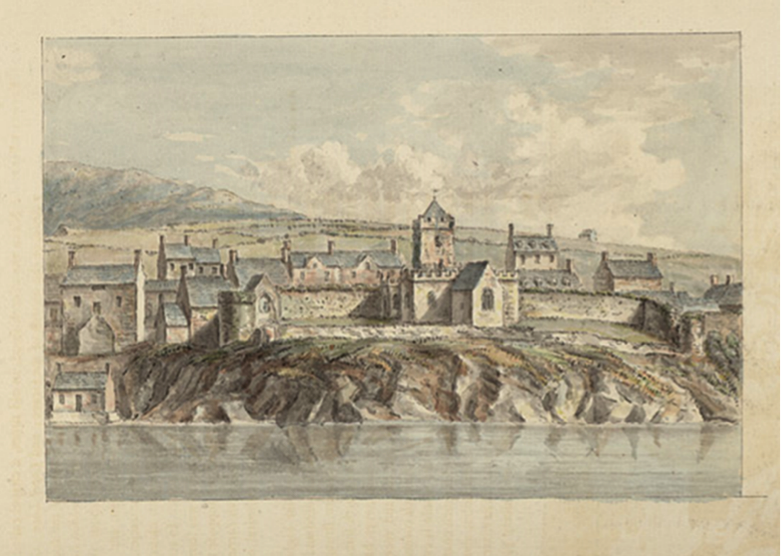 The tour reveals Pennant’s usual wide-ranging curiosity, beginning with a productive morning’s botanizing with William Morris at Holyhead. Here he finds an anemone

displaying various beautyfull branches, always expanded. it readily seized on any bit of fish offered it and made use of those branches to convey it to its mouth; these branches seemed furnished with small nervous papillae which adhered strongly to my finger.

This possibly marks the first meeting of two men who would become excellent friends: William Morris (1705-63) would write to his brothers of how proud he was ‘of such an ingenious worthy man’s friendship’. The late June crossing to Ireland was not easy: ‘one part of the time a rolling sea and no wind. When off the Hill of Howth an hard gale from land drove us several leagues North’ – and it was Friday morning before they reached Dublin, where he spent several days seeing the sights, including the College and Museum (‘ill furnished’ but with two British axe heads that he rather liked). He then proceeded north and toured Ireland anti-clockwise, taking in a wide range of places from Ballycastle in the far north to Cork in the south. 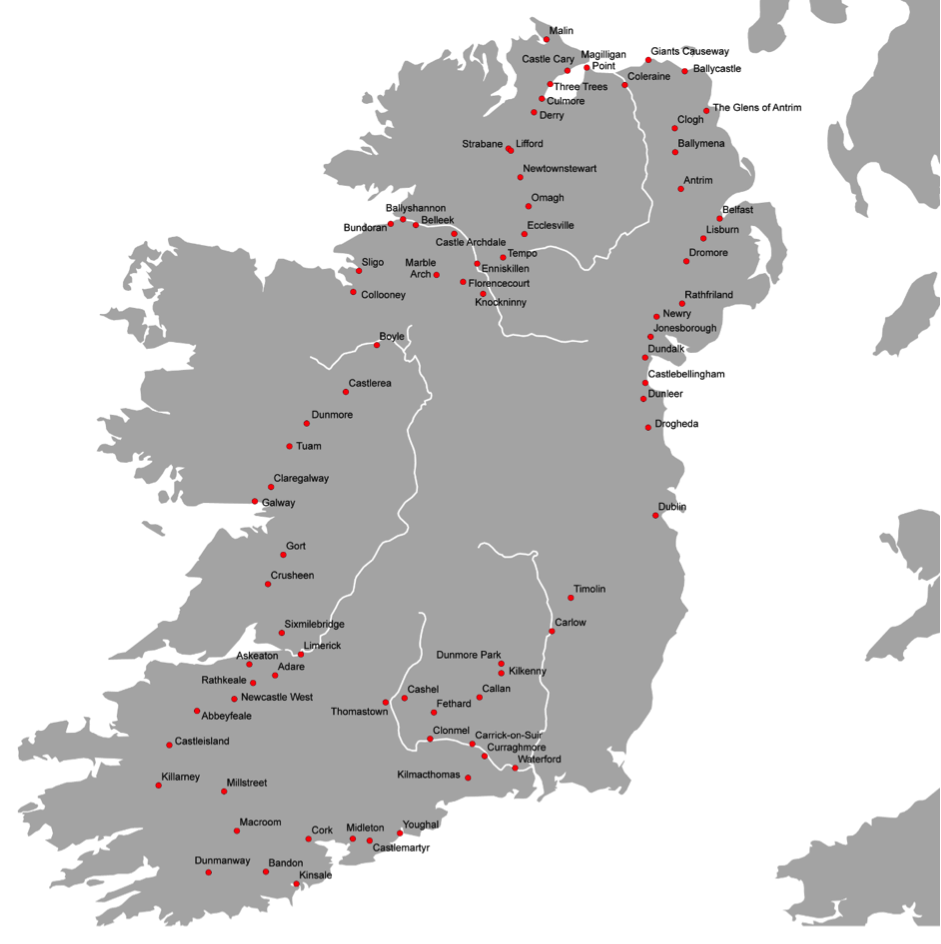 Pennant’s Irish Itinerary reconstructed from the journal. With thanks to David Parsons.

The Curious Travellers project intends to publish the Irish Tour online, and hopes to have a ‘raw’ unedited text transcribed and available to read before long. My recent experience of introducing the tour at the Eighteenth Century Society of Ireland’s annual conference (Dublin, 2017) made it clear that there is a wealth of existing expertise upon which we could draw in order to put a little more flesh on the bones of this account. Pennant had letters of introduction to gentry houses the length and breadth of the island, many of them important estates undergoing mid-century improvements to their land, houses and gardens: he also visited coalmines and linen manufactures, barracks and harbours, churches and castles. Antiquities and natural phenomena are noted as points of interest, but it is clear that improvement was the main focus of this tour. In a letter to his aunt he compares the landscaping projects of the Annesleys of Castlewhellan to the efforts of Colonel Hugh Boyd at Ballycastle:

The country in these parts owes as much to this good man’s industry, as that about Mr Annesley’s (as mentioned in my last) will soon experience from the indefatigable pains of the latter. The difference consists only in this, Mr Annesley is improving his Land, and Mr Boyde is attempting to form a flourishing colliery and a secure Port. The former he has in some measure succeeded in; but the latter seems still in an uncertain state. A turbulent sea, and a destructive insect has done vast damage, a small grub scarce the 8th part of an inch in length having in five years space utterly destroyed part of the finest oake he had employed in his Pier.

One of the most significant encounters Pennant had was in Kerry, where he spent a week as the guest of Thomas Browne, fourth Viscount Kenmare, at his newly redesigned house in Killarney. Indeed, the arrival of one Thomas, born 1726, sometimes considered the ‘father of Cambrian Tourism’, at the home of another, born the same year, sometimes considered the ‘father of Irish Tourism’, is a thoroughly gratifying historical coincidence. Pennant would ‘Lye at Lord Kenmares’ for a whole week, riding out to see castles and walks, copper mines and plantations, visiting his lordship’s linen manufacture, witnessing an ‘Irish Papist funeral’ (a version of which would later resurface in the 1769 Tour in Scotland) and of course visiting the Lakes of Killarney. Here, as he told his aunt, he was treated to ‘the Beauties of the celebrated Lough Lene’:

These entertained my Eyes; but that was not the only sense that was pleased; for my Hearing had its share from the surprizing Echo from the mountains: to enjoy this in the greatest perfection his Ld brought on the water two French horns, a fife, a drum and Two swivel guns: every note was returned to the former, but when the Latter were discharged the loudest claps of Thunder I ever heard were unequal to the sound returned. 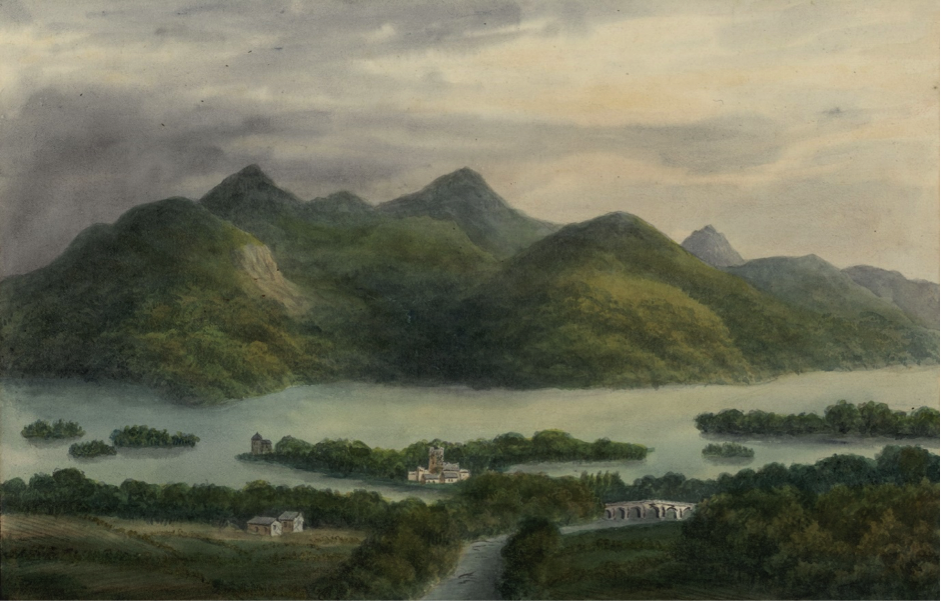 As William Williams and Luke Gibbons have shown, the Killarney Lake Experience has by now become a kind of locus classicus in the history of Irish tourism; it seems both apt and amusing that Pennant should have taken part in this ‘tourist ritual’ during its earliest stages.

There is much to be learned from this hastily-jotted journal and the few accompanying letters, not only about Pennant himself as a young man on his first major journey from home, but about the ways in which his experience of Ireland and Irish society (in all its political and cultural complexity) might have shaped his responses to his Scottish tours, undertaken some fifteen years later. It meshes Pennant’s Tours still further into those ‘four nations’ or ‘archipelagic’ conversations which have contributed so much to our understanding of the eighteenth century in these islands. Some of the people he met and the places he visited are well-known, but researchers of C18th Ireland –academics, local historians, genealogists–will certainly be able to shed light on more obscure details. We would be delighted to hear from anyone who can help; all contributors will be acknowledged in our final edited version. We look forward to working closely with colleagues in Ireland to unpick some of the more elusive events and encounters hidden between its scrawled lines.

Luke Gibbons, ‘Topographies of Terror: Killarney and the Politics of the Sublime’, The South Atlantic Quarterly, 95.1 (Winter, 1996) 23-45