On 11 July 1799, the 22-year-old Scottish painter (later traveller and diplomat) Robert Ker Porter (1777-1842) arrived in Shrewsbury, ahead of a walking and sketching tour of north Wales. Porter had for company his friend and fellow artist Thomas Underwood (1772-1835), on a month-long and roughly circular tour that took them across Wales to the western coastline (Dolgellau, Barmouth), then up to Snowdonia, and back through the Vale of Clwyd to Chester and the Peak District.

Art was almost certainly the spur to this trip. Porter frequently mentions drawing, and notes how he and Underwood met up with other artists, including Louis Francia and one of the Varley brothers (probably John Varley), during their tour. These men were part of a busy network of young artists in late-1790s London that also included JMW Turner and Thomas Girtin. Porter’s closer, more immediate group of artist friends was known as ‘the Brothers’; formed in May 1799, the group included Underwood and Francia and met (as Francia noted on the back of one of his sketches) in order to draw scenes of ‘Historical landscape, the subjects being original designs from poetick passages’. By July 1799, Porter, Underwood, Francia and others were in Wales in order to sketch not from poetry but real life.

While art might have taken him to Wales, Porter’s tour is also a highly readable account of several weeks on the road, characterised by a lively and often dryly funny narrative voice, and by neatly chosen detail. At times he finds fault with his surroundings, loses patience with the unsettled weather or with his companion, but always sounds human. He’s a sharp observer of people and places, while his artist’s eye comes to the fore in sections on the sublimity of Cader Idris and Snowdonia. The sketches Porter made on this tour are not known to have survived, except for four small drawings – all of people – within the manuscript notebook. However, several watercolours by Thomas Underwood, held at the Tate, including two paintings of Caernarfon (below) and several unnamed coastal and mountain scenes, may well date from the 1799 tour. 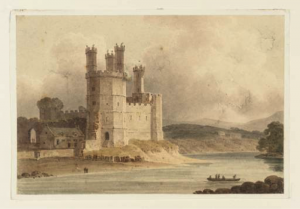 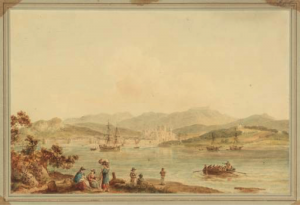 The following extract, presented with the original spelling and punctuation, represents around a tenth of the manuscript, and shows Porter narrating the early part of the tour. In this passage, the tourists have reached Mallwyd in mid Wales, where Underwood’s ‘gallantry’ results in the pair losing their room for the night to ‘three heaven formed fairs’: Porter’s textual eye-roll at his friend’s behaviour is impossible to miss.

f.19
Unfortunate mortals – . It rains like Devil [sic], 9 o clock in the morning and no prospect of seeing a fingers length in front. went into the church yard where are now existing a few ancient Yews large in circumference, and vast in observance. My friend Underwood conscious they are not Less aged than one thousand 12 months. our Host said the Largest is 7 and 20 feet round – few of the people speak English, yet all the tombstones are in that Language: one thing I have forgot to remember almost ever since the commencement of this truly venerable recital of circumstance, which is that instead of the Elegant goat, every animal is [a] Pig, at every turning there is a Pig in every house there is a Pig, nay every body is a Pig — .
f.21
at 1 o clock it cleared up and we ventured forth to draw. Made the first coloured sketch from Nature looking towards Dinas Mowddy. on our return to the Inn, there came a group of four pedestrians fatigued famished and filthy. they seemed men very thick upwards and were bound for Birmingham. – Underwood thought them buckle formers. Was our gallantry equal to Tommy Underwood’s – !!!! the distant sound of a Carriage roll’d in redoubling sounds across the winding Mountains, a few moments and the vehecle [sic] was at the door of the Cross Foxes (Poetic Sign!) the night was far advanced the lowering clouds gathered low
f.23
and dark in the Bosom of the Valley the coming storm, which threatened instant destruction to the houseleeks traveller, produced a concattenation [sic] of circumstances truly critical. There was at this moment not a vacant room either with or without a bed, this doleful intelligence was communicated to the content, of the gay Machine by our civil Hostess. the consternation such horrible news created on the minds of three heaven formed fairs was not of long duration, for the alert and elegant minded Underwood, sprang to the side of the Charriot [sic], and in the accents of a Chesterfield proffered his bed and dwelling, his words
f.25
were mine, so they now possess of a good resting place for the night and we were shoved in among the Birmingham Buckle formers. the modest but amiable Bashfullness of my friend so overpower’d his memory, that on their accepting his heroic offer, he Left the Carriage door – – . They found the way out themselves – and he rejoined me. what I ought to have done I will not say. – 10 o clock the Buckle Makers are gone to rest the exchange of beds was not for the better. but then the satisfaction we had rendered ourselves and the comfort to others rendered our rest more pleasant than had we been poked into a garret [?divested] of such occurences [sic]. at 10 this morning we saw the fair charrioteers [sic] off, then the Buckle Makers, and next ourselves. Our walk this day (16th July) was through Dinas Mowddy. it raining extremely hard. however notwithstanding this we managed to draw a Picturesque water mill about a mile from Dinas, continuing our Journey for some miles the Country varied little from that hitherto. only the Outline of the Mountains became somewhat bolder and more broken by rock. about a mile before the View of Cader Idris opens from the narrow vale of the Mallwyd road; there presents a most exquisite mountain both in shape and colour, and which we made a slight memorandum
f.29
[Dolgellau] of called Cwy Avon. after the ascention [sic] of the opposite hill; journeying onward some certain distance, the stupendious [sic] Cader rises in vast piles of chaotic grandeur, surrounded on every side by lesser heaps of cloud on shadowed hills. as we nearer drew to the Town of Dolgelly on [the] right we discovered the Mountains of Beddhellert [sic] and Snowdon. This is a Magnificent assemblage of dwellings for wales, which as they are so called are termed a Town, which is strangly stragling [sic] and oddly connected. here we arrived at five determining to stay a few days, but the beastlyness [sic] of the Inn totally upsett [sic] all our plans, and after a sleep incomodious and uncomfortable we arose July 17 and
f.31
started at 10. persueing [sic] our way through a country more delightfull [sic] than conception can conceive.