When I started to read Thomas Pennant’s Tours in Wales I found myself travelling to all parts with him, curious to find out about the time in which he wrote and of course about the area in which I live ,in Snowdonia. I live in a small hamlet called Rhyd in Gwynedd and found that Pennant came to both ends of my road. He stayed at Plas Tan Y Bwlch on the one end and rode across to Croesor on the other. I walk the land around where I live regularly and it is the main source of inspiration for my creative work as a sculptor.

The area I did choose to focus on for this enquiry however was the Nantgwynant valley, a few miles away.

Pennant describes it as –

“…the most beautiful vale of Snowdonia  varied with woods ,lakes ,rivers and meadows…”

“an excellent carriage road has recently been opened, which passes through this valley…presenting a succession of scenery the most desolate, the sublimest and the most romantic”

My first walk down into the valley was on a rather dark brooding day of contrasting light and shadow, which fitted well with Pennant’s description. 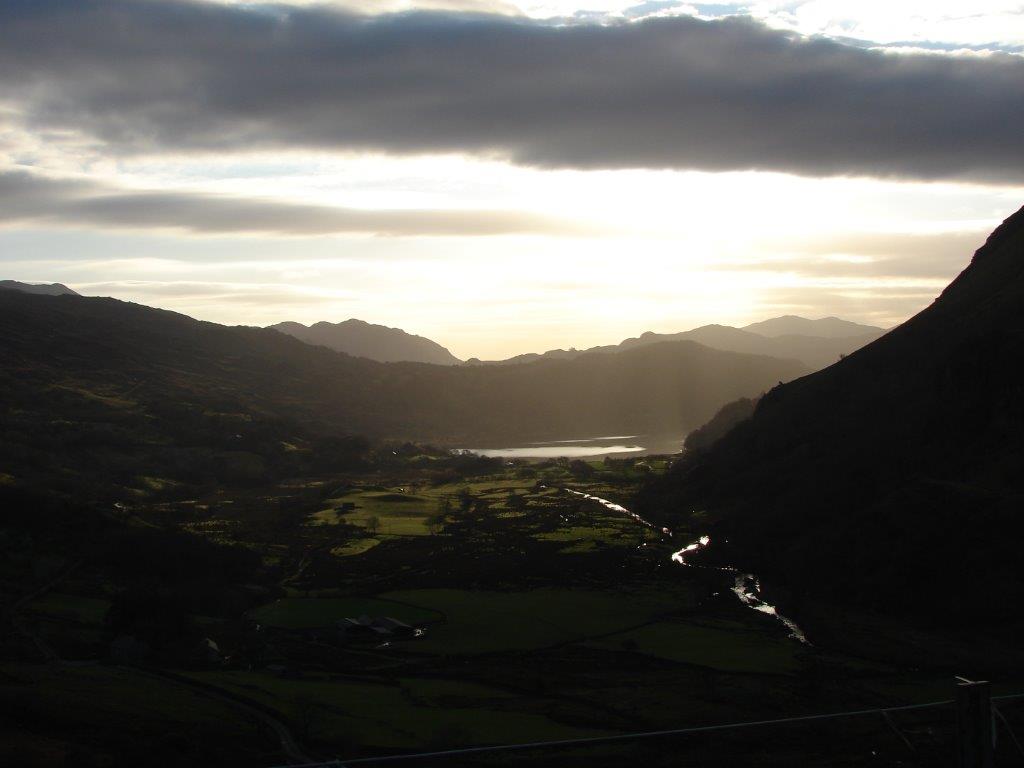 I returned on a clear bright day to walk again from Llyn Gwynant to Llyn Dinas and found that wherever I looked the landscape was mirrored. 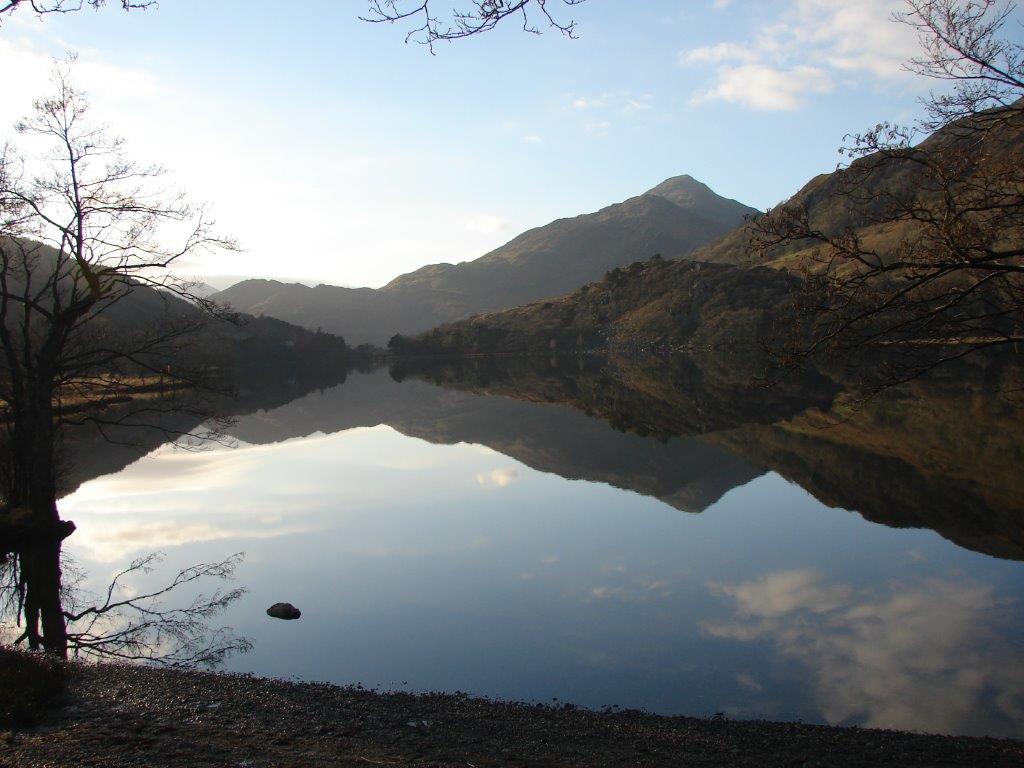 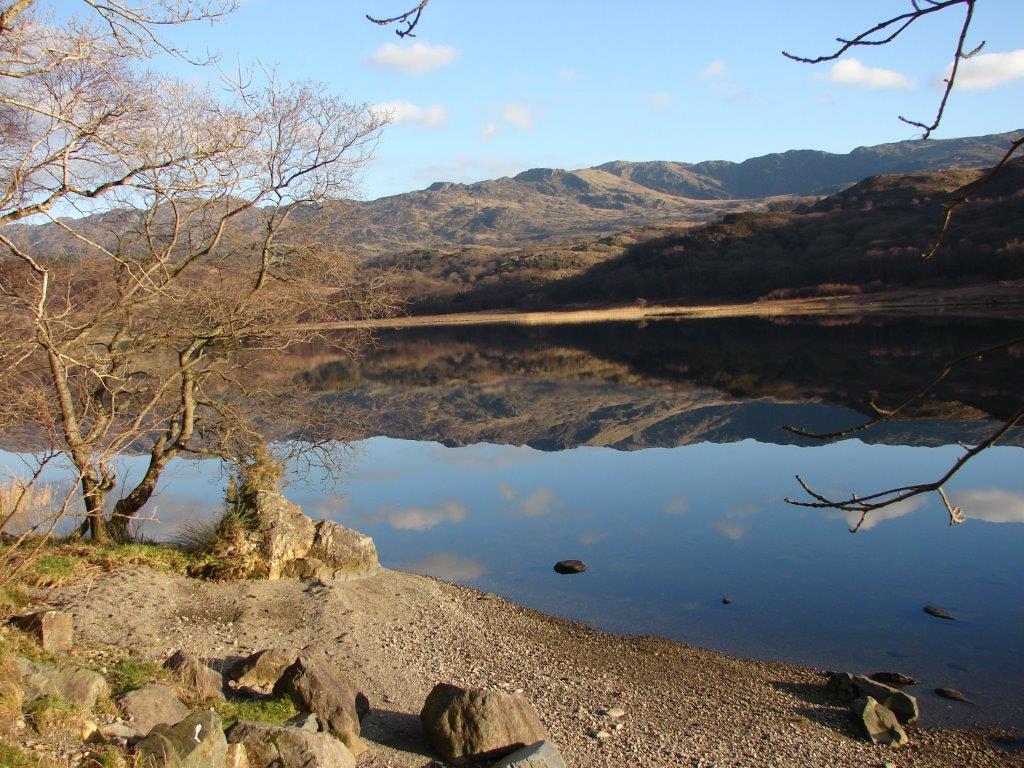 The concept of time, past and present dominated my thoughts. It felt as if time had stood still and I found myself wondering if Pennant saw these same sights on a clear still day. Reflections never change.

Pennant writes that at the bottom of Llyn Dinas –

“lies a vast rock, insulated and cloathed with wood, the famous Dinas Emris, from early times celebrated in British story, for here –

Prophetic Merlin sate, when to the British King

The changes long to come, suspiciously he told.”

This is where my walking has halted as I became fascinated by the place. 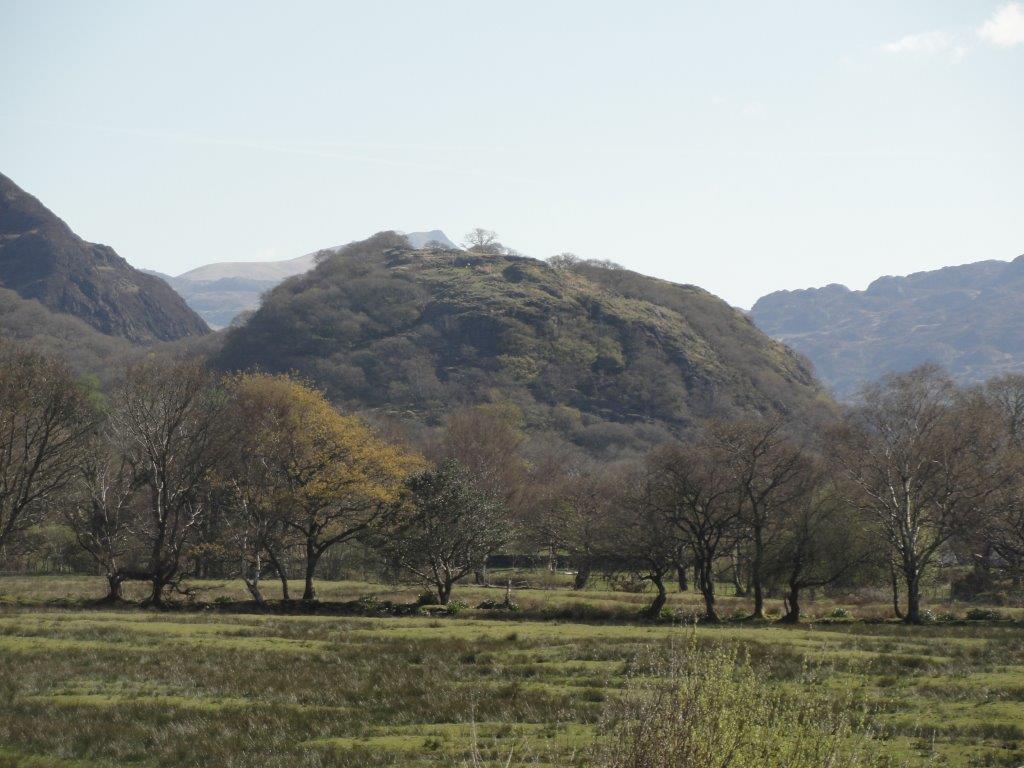 It hasn’t changed much from the engraving by Moses Griffith which was included in A Tour in Wales.

The walk up along the National Trust path on that April morning was inspirational.

Can one’s act of walking/journeying, followed by myself be an invitation to another’s imagination?

I have started to keep a journal documenting my process, some in done in situ and some as a reflective response to the walk. I have only included sections of it here.

The old oak trees pre dominate the path up to Dinas Emrys and I was transported back in time walking amongst these mossy cloaked trees. Skeletal branches of winter are now full of buds of spring, about to burst. 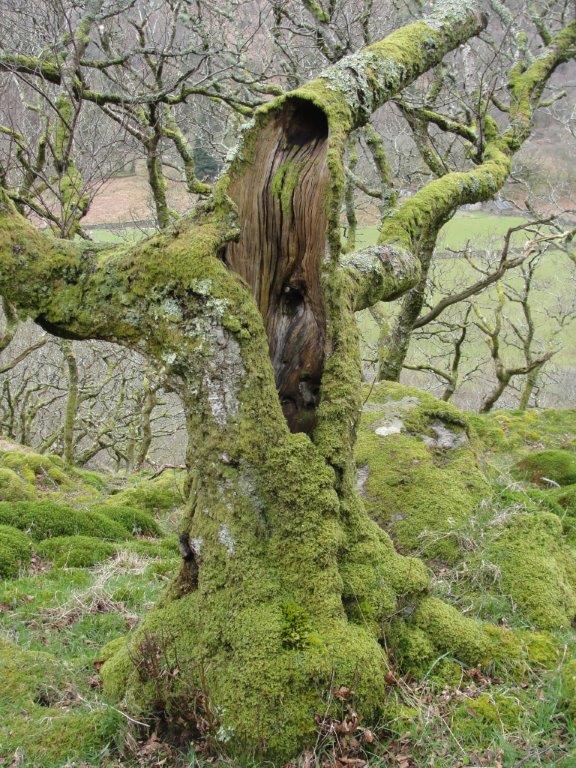 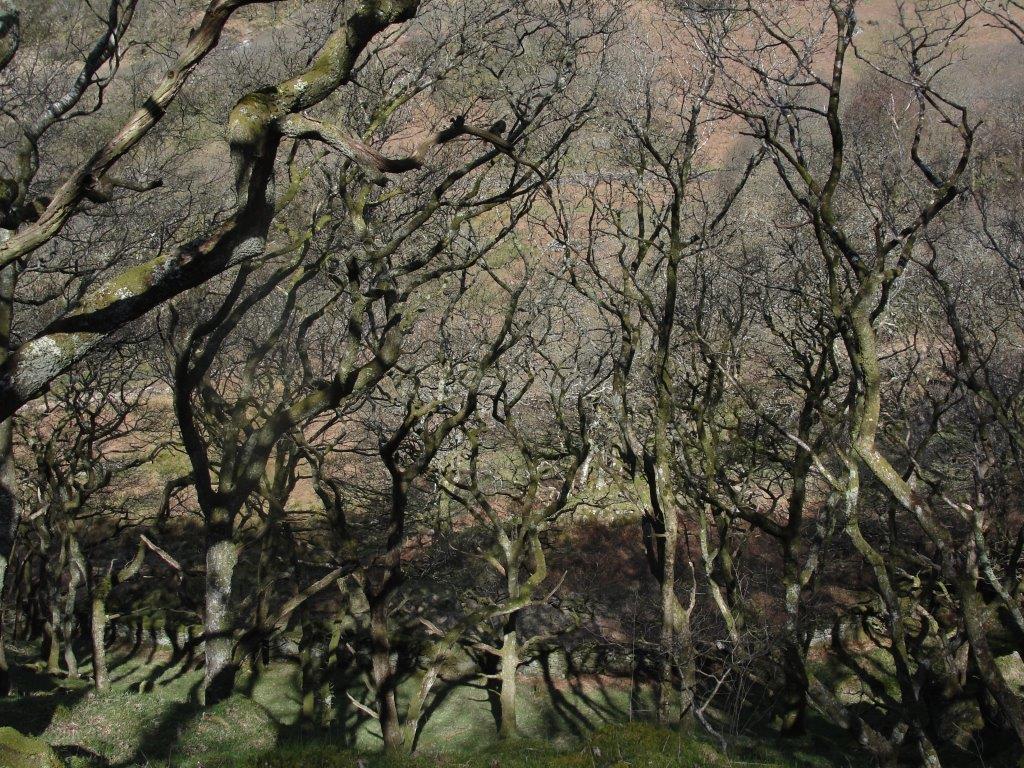 I wondered if some of this ancient woodland would have been here when Pennant came through this area. The new entrance is from the NE along the ridge but the original entrance was by a steep path on the western side of the hill fort.

The strongest remains are of the foundation walls of the high Mediaeval tower that was, as Pennant described possibly Vortigen’s stronghold. It was a very still, sunny morning and I sat with my back against the stone foundation walls, sharing it with only a flock of wild goats. 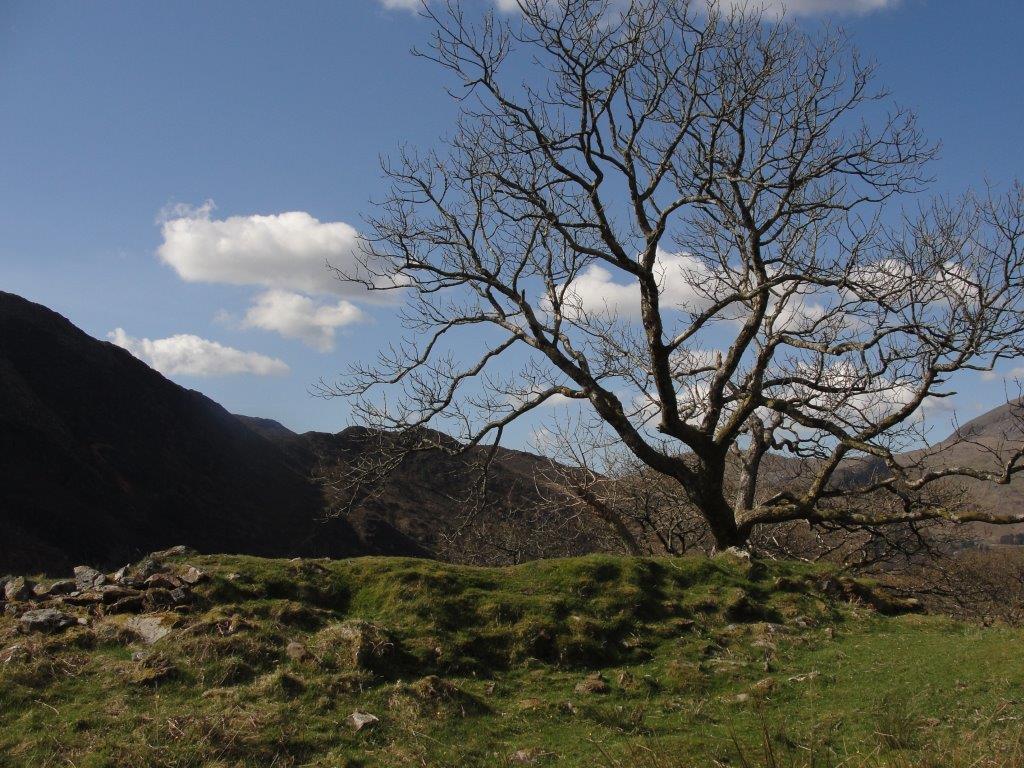 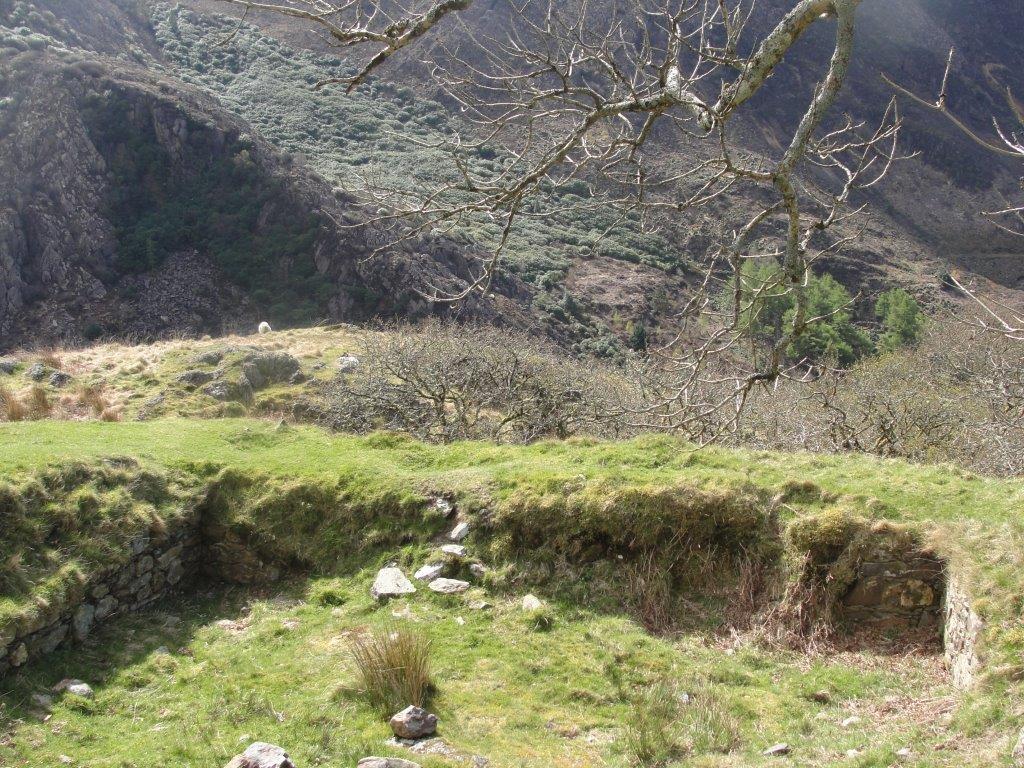 I had with me a historic account of the fortress with all its archaeological findings and the legends associated, but I just sat and absorbed the spirit of the place. It is very atmospheric, with or without its history and legends. On one visit I coincided with a young family from Cardiff whose daughter had just been learning about the origins of the Welsh red dragon on the flag and had come to the place where it is said to be lying.

A circle of mountains surrounds the hill fort with Llyn Dinas and the Afon Glaslyn below. 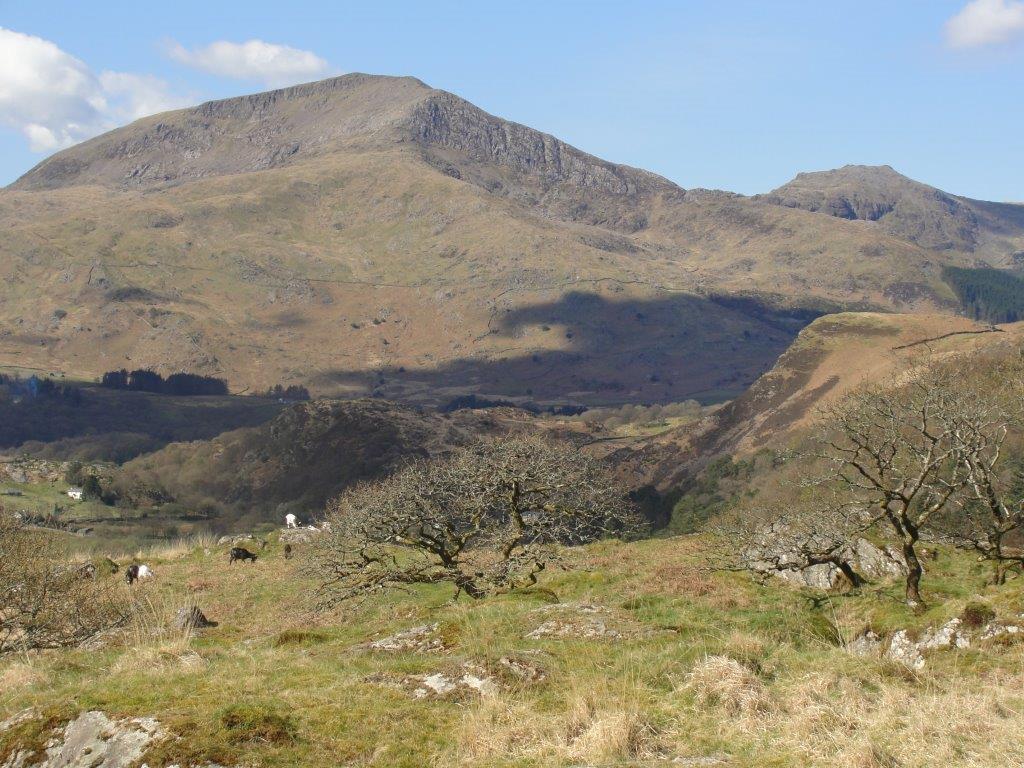 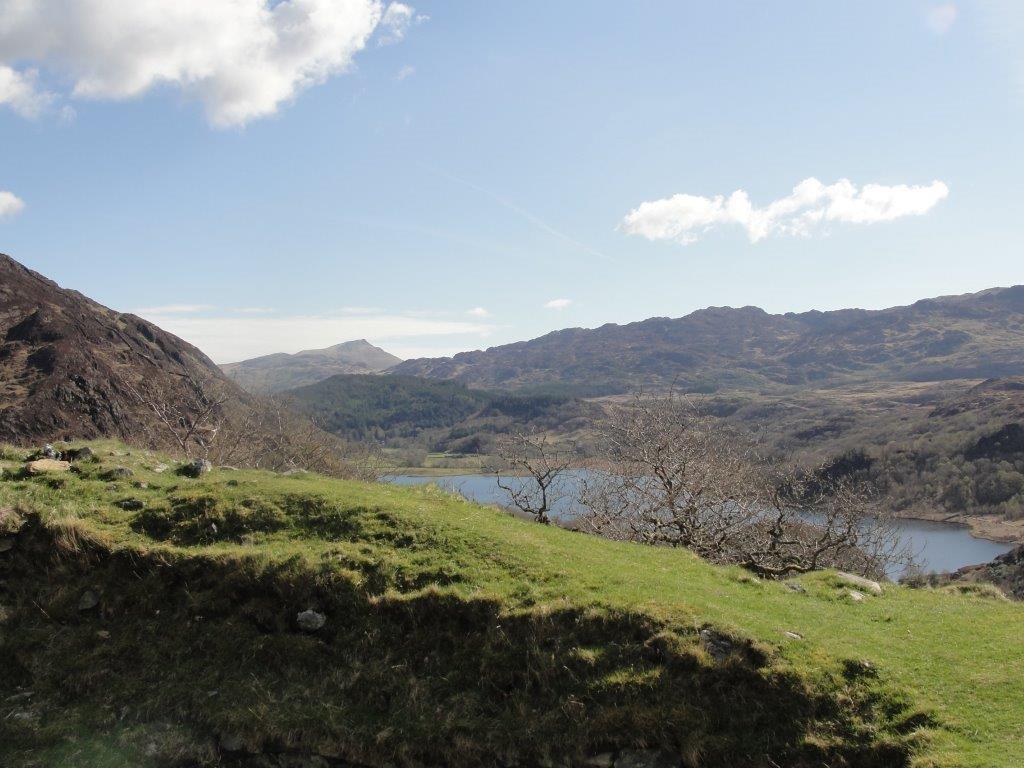 I walked around the whole fort, including the base and found myself searching for any evidence of

“a place close by styled Cell y Dewiniaid, or the Cell of the Diviners, allusive to the magicians of Vortigen’s court, is another circumstance which favours the history of this celebrated supposed prophet.” (Thomas Pennant)

I later found evidence of this from enquiries through a friend who put me in touch with Kathy Laws an archeologist who worked in the NT in Betws y Coed, who not only sent me a 1900 OS map which marks the place but also a complete report that was carried out on the area by Shaun McGuiness in 2013. I have details of all this in my journal.

And so to the legend of the boy Merlin who challenged the wizards to dig down near the tower of Dinas Emrys where they found a pool. There, in the pool were two dragons, one white and one red: they were fighting. Merlin explained that the red dragon, which appeared initially to be losing the fight, represented the people of Britain and the white dragon, represented the Saxon, from whom Vortigen had fled. Merlin prophesied that the Britons would rise again and push the Saxons back.

The legend and the land have become one and this is what has inspired my response to the place.

The collecting of natural materials in order to draw, as research material or to use in themselves has  always been a part of my artistic practice and so my walks on and around Dinas Emrys have provided the materials needed to begin my work .

I collected samples of stones and earths from the land around and on Dinas Emrys. On the opposite ridge to the fort lies the Sygun copper mine which began in Victorian times and this is where I found the deep red pigments. Pennant was particularly interested in the Copper mines of Parys Mountain and should the Sygun mine have been working at the time he visited Nant Gwynant he would certainly have been halted in his tracks while he explored them. 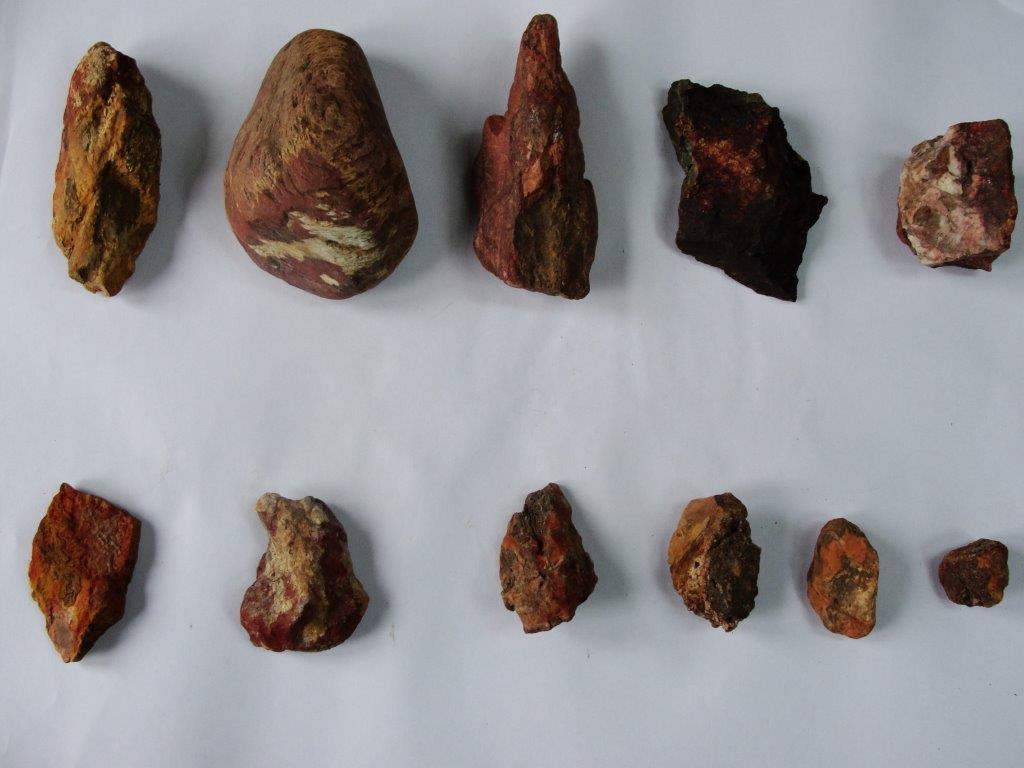 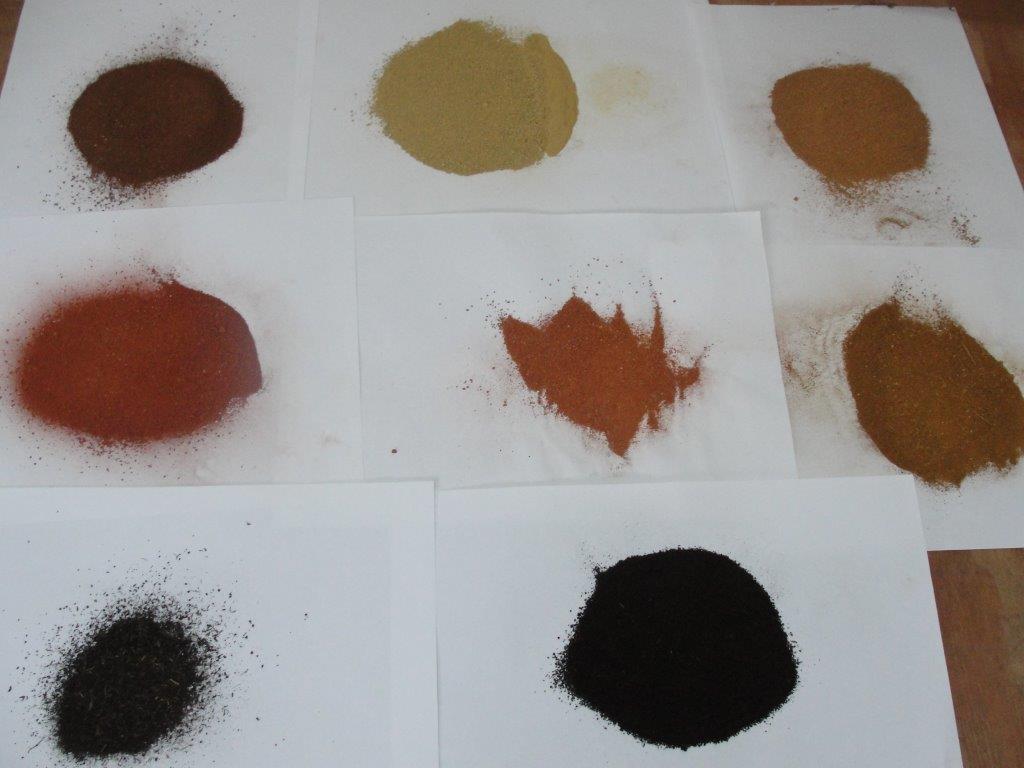 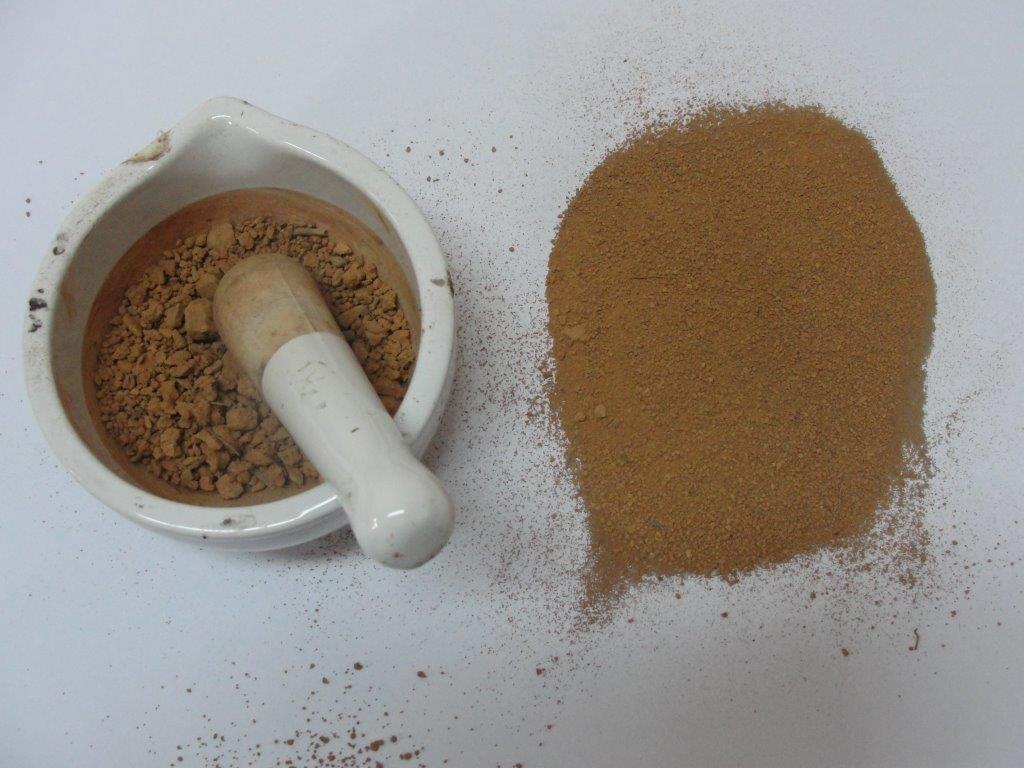 Working with the collected colours of the land, I made a small “Book of Earths” to begin my investigation into this chosen place – Dinas Emrys. 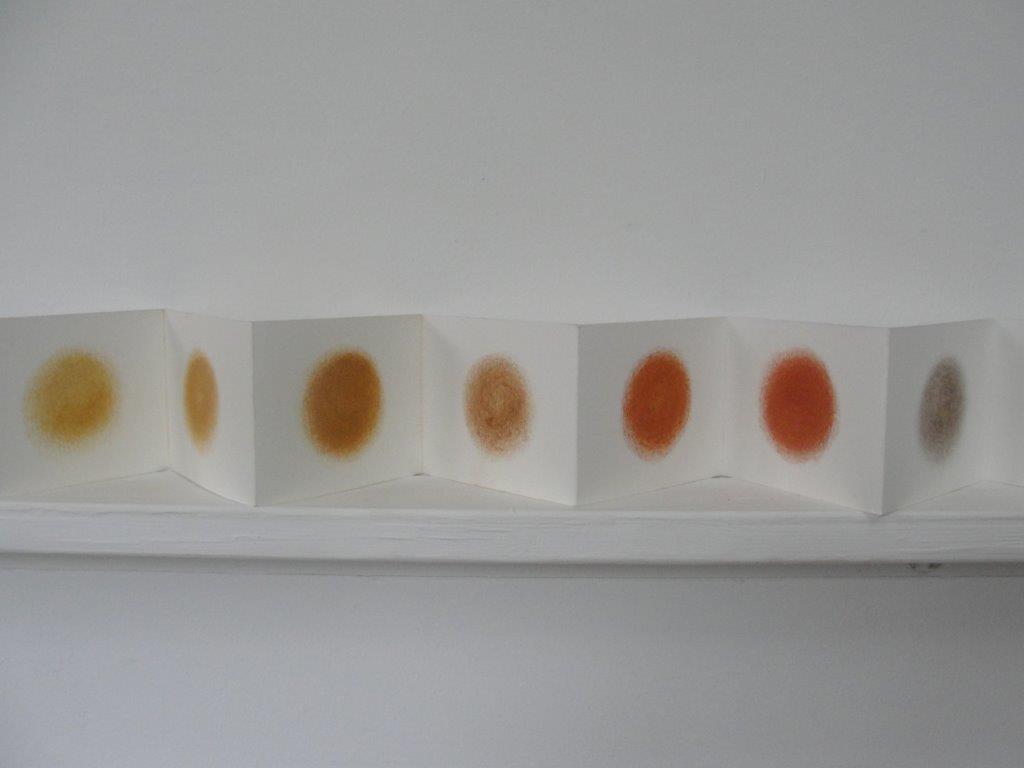