for Liz Fleming-Williams, who introduced us to JM.

Back in 2013 the National Library of Wales held a memorable exhibition of Welsh landscape art. Among many familiar names, from J.M.W Turner and J.C. Ibbetson to Kyffin Williams, was one I didn’t know: John Malchair. The images – striking sketches of houses on roads winding through the hills – pulled me over to his corner of Oriel Gregynog. It took a minute or so before I realized that these were pictures from the 1790s; there’s something oddly modern about the sweep and boldness of the lines done in graphite, often with a watercolour wash. The exhibition also had a display case containing Malchair’s notes on the tour he made to Wales in 1795, written in his quirky spelling and open at July 28th: 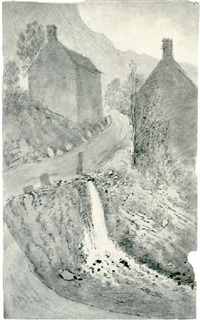 ‘Now the country becomes suddenly Welsh and we enter a region of Mountains, here English is an acquired language and much wors spoaken than French in England, by no means so common…The trees are small and twisting often More picturesque than luxuriant timber trees’.

He noted too, the vivid greens at the base of the mountains: ‘Moss crumbled over with fragments of rock that continually role from the topp and are verry favourable to the painters touch as are also the summits on account of theire cragginess’.

One aspect of our project is exploring how our travel writers capture the experience of movement through landscape: not just the practical struggles of mud and pitted roads, but the continual shifts of light, colour and perspective. Malchair’s drawings are wonderfully kinetic. In one of my favourite sketches, ‘Dinas Mouthwy, 1795’ the movement is in many directions: water flows across a road which leads us up past the out-of-kilter cottages to the sharp slope of the hill. Catherine Hutton, travelling from Birmingham that same way a year later, evokes something similar in words:

Our road was a terrace cut on the side of the northern range, generally fenced with a hedge, now and then without a fence, sometimes on bridges thrown over streams, which poured down from the mountains across our road, and sometimes through them; while, swelled by the rain into little torrents, they tumbled in cascades into the river below

Malchair also did many pictures of Oxford – its buildings and back-streets, full of fascinating glimpses of daily life – and his work was gathered together for an exhibition in the Ashmolean Museum in 1998. John Malchair of Oxford, Colin Harrison’s beautifully-produced catalogue with essays by Susan Wollenberg and Julian Munby, is full of insights and information, and includes a full transcription of the Welsh tour notebook cited above. As these writers acknowledge, the rediscovery of Malchair was largely due to the pioneering work of Ian Fleming-Williams, a Constable scholar who built up a large personal collection of Malchair’s drawings. This sweeping view of ‘Moel-y-Ffrydd’ near Llanymawddwy was donated by Fleming-Williams to the Tate in 1997: 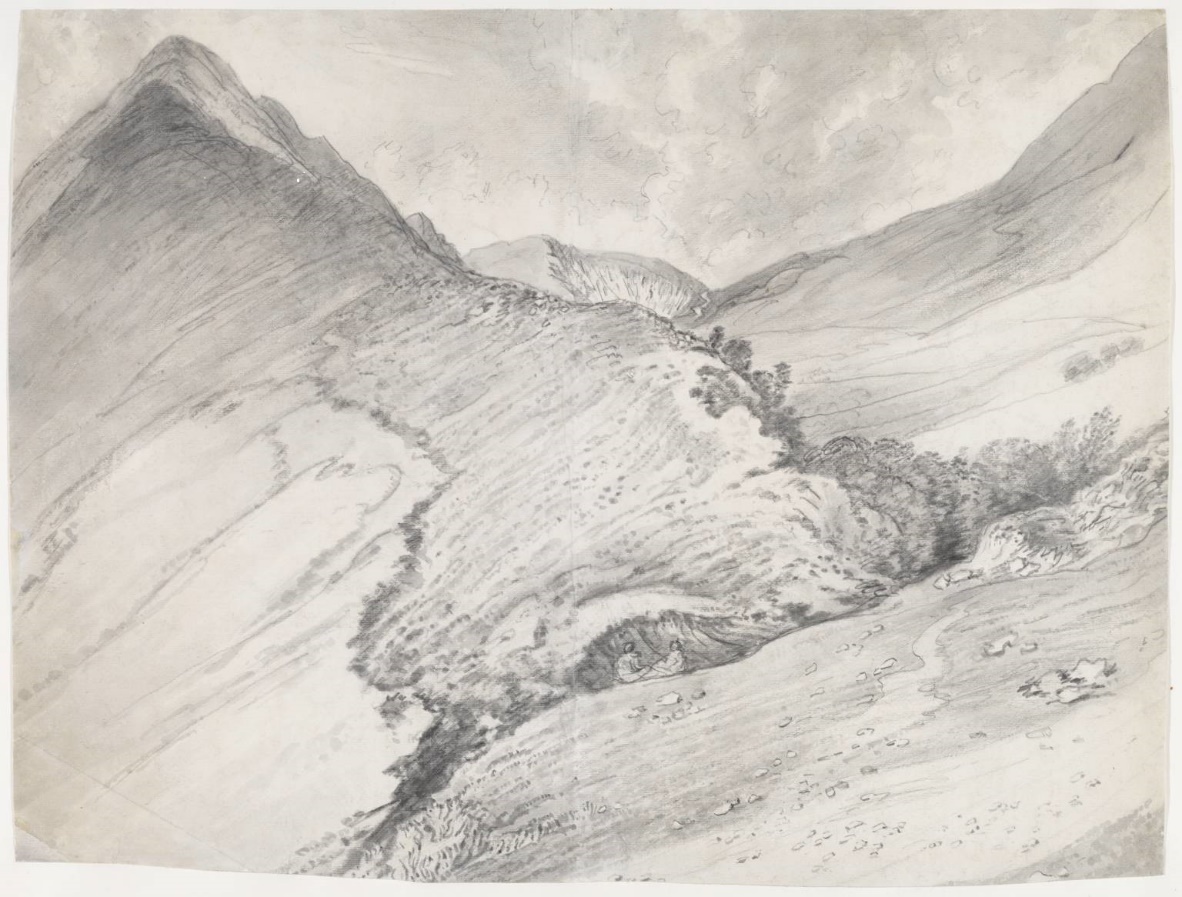 ‘It is not difficult here to account for the Sublimity, the objects are vast and very uncommon to Eyes that are only wont to contemplate the beauties of a rich farming country’ JM p.130 John Malchair, ‘Moel-y-Frydd 1795’, Tate Gallery, donated by Ian Fleming-Williams. Available under a CC-BY-NC-ND 3.0 (Unported) licence: http://www.tate.org.uk/art/artworks/malchair-moel-y-ffrydd-t07011

In 1795 Malchair travelled with the Revd George Cooke, a Fellow of Oriel who had an interest in geology; perhaps as a result of their conversations the images of landforms from this tour have an especially energetic intensity. The pair stayed for nine days exploring the country around at Dinas Mawddwy, where Malchair sketched intimate scenes of huts and pigs and tumbledown cottages as well as the grander mountainscapes, before moving on to Barmouth, where they were further entranced by the play of light and weather along the coast.

Malchair the musician was not idle in Wales. As Margaret Dean-Smith has shown, he had a keen interest in traditional tunes, which he would pick up from all manner of sources – in manuscript collections or from buskers, beggars, and even from the whistling of passers-by on the streets of Oxford. He was especially interested in the idea of ‘national’ song, a subject which – partly in the wake of the success of Robert Burns – became increasingly popular in Britain the early 1800s. His manuscript collections in the Royal College of Music and elsewhere (currently the focus of a PhD dissertation: see bibliography) contain hundreds of tunes which he defines as ‘Scottish’, ‘Irish’ and ‘Welsh’. Of the latter, we know from notes by his disciple William Crotch that some were collected on his tours: ‘written down by Mr Malchair, who heard it sung in Harlech Castle’ (JM, 41). Some of Malchair’s own compositions clearly drew on traditional songs, and this little piece, ‘Farewell to Dinas Mawddwy’ records his affection for a place that, evidently, had moved him very deeply indeed.  [We are currently recording the tune which will be available here] 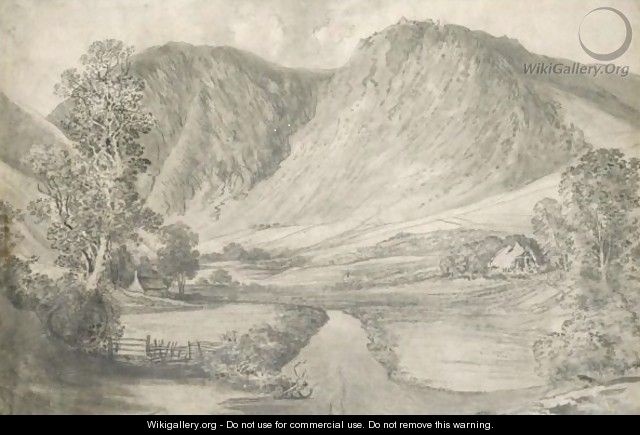 Bwlch y Groes, north-east of Dinas Mawddwy: ‘In this scene the dreary and the comfortable are happely blended, Mr Pennant calls Bulch y Gross one of the most terrible passes in north Wales’, JM 131-32. Image courtesy of Wikimedia Commons. http://www.wikigallery.org/wiki/painting_389759/John-Baptist-Malchair/Bwlch-Y-Groes,-North-Wales