Thursday 26 May. The University and College Union (UCU) had called on its members to stage a strike, as part of an ongoing dispute over pay. Although I would officially be on strike I knew I was likely to spend the day quietly working, and Mary-Ann admitted the same. We decided to go hiking instead.

But where to walk? Quickly settling on Mallwyd, we weren’t just following in the footsteps of Thomas Pennant. Mallwyd is a crossroads, linking Snowdonia with mid-Wales and the coast beyond Machynlleth, and so many of our travellers passed through it. We checked our notes and found the father-and-daughter duo William and Catherine Hutton – curious, hardy, humane visitors – among the best on the area. (Catherine captures Mallwyd’s setting in a few words: ‘the junction of four vales, and consequently the meeting of four roads; for here roads cannot get over the hills’.)

Meeting at the Brigands Inn, right on the crossroads, we dig out maps over coffee and choose a circular route starting from Dinas Mawddwy. First, though, a colleague’s recommendation sends us through a lane of cottages to Mallwyd’s church, St Tydecho’s. Eighteenth-century travellers stopping at Mallwyd mention without fail the church’s massive yews, still there, their trunks fanning out in different directions. In July 1796, Catherine Hutton saw them as symbols of an unchanging world:

In the churchyard of Mallwyd is a yew-tree, that, tradition says, is 700 years old; and it is not easy to imagine a sport where a yew-tree could have witnessed fewer vicissitudes in the objects around, during that length of time. The rivers, the rocks, and the mountains, are immutable. The woods are the lineal descendants of those that flourished when the yew was planted. Their houses, probably differ little in number, and but few of them in convenience. The roads are undoubtedly the same; for nowhere else could they be made to pass: they are only widened to admit a carriage. The yew-tree has nine distinct trunks, one in the centre, and eight that surround it; and the circumference of their united branches is computed at upwards of 200 ft.

Typical tourists, we climb into the centre of the trees, look for eighteenth-century headstones, admire their carvings. As always I have to brace myself before walking across graves placed end-to-end in the long grass. 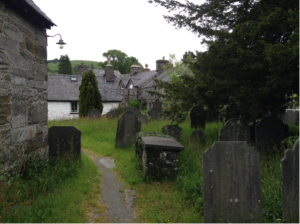 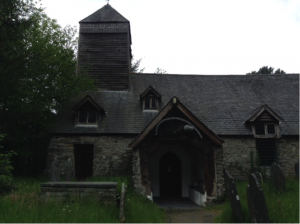 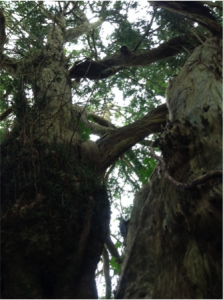 The entrance to the church is bizarrely guarded by a giant tusk; inside the pews are banked up like a theatre. I climb to the top, try to imagine the space filled with bodies and voices, stare out at the hillside rising sharply alongside the church. I know Catherine was struck by the same kind of view:

The mountains which encompass it are so high that it is difficult to determine whether the white specks we see near their tops are stones or sheep, till we observe them change their place. On the sides are small patches of wood, or enclosed lands, with here and there a cottage.

We head back, drive on to Dinas Mawddwy, find a café serving takeaway lunches – cheese and sundried tomato sandwiches, a slab of cake – and turn back to the map. We had chosen an easy route for the first part: a flattish walk along lanes and bridleways to Abercywarch. The sky begins to clear; we watch the landscape change around us, post-mortem a recent conference, wonder about the future. Head on through steep-sided farmland, past a graveyard of metal and machinery, a tied-up dog goes crazy. Tadpoles crowd a shallow puddle. 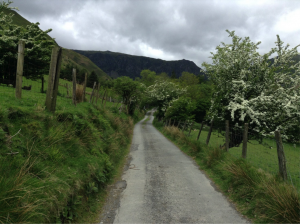 Ahead, towards Cwm Cywarch, the view is dark with bare rock. We know we have to cross the ridge to drop back to Dinas Mawddwy, but the map looks none too clear to me on how. We walk on, spot a route we know our colleagues have taken before us: the ghost of walks past. Looking across at the broken rockface I wonder if it’s natural or worked (quarried, I discover from a sign in a car park). We realise we’ve gone too far and missed the path; we double back, knock a door for directions, but there’s no one home. We’ve barely even seen a passing car, and suddenly this valley feels uneasily remote. Somewhere nobody would hear you scream. We cut across country, through the last of the bluebells, hope not to be spotted. And then the path appears – we’ve climbed a little and can see all too easily where we went wrong.

The climb gets harder, conversation slows. Higher and higher, and the view changes, no longer diagonal lines criss-crossing but now a single curve, Bala and Lake Vyrnwy beyond. Mary-Ann stops to photograph some of the ferns that by this point cover the damp hillside. Tiny, intricate tendrils. 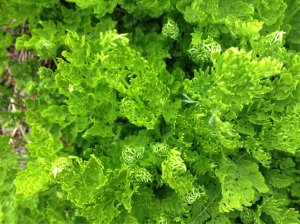 Our route over the ridge is clearly an old and well-trodden one. We try to picture its past travellers, making for the other side of the hill – sharp though it is, it seems like much the much the quickest way of crossing into the next valley. We stop at the top, try to catch some breath, eat something, but abandon sitting down for lunch-on-the-move as the midges swarm for us. 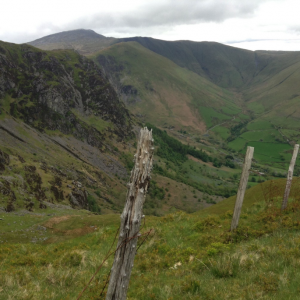 The other side of the hill is nothing at all like the deserted valley we’ve just climbed from. The skyline is gorgeous, but our immediate surroundings are desolate with cut forestry, and then military jets smashing through the quiet, again and again. They make the sheep miscarry, Mary-Ann says, furiously flicking Vs at the disappearing jet. I think of her story, ‘The Breathing’, and our talk turns to writing.

Heading down towards the main road, we find we’ve missed the path again. I’m not walking on the A470 says Mary-Ann, so we turn back into a side lane at the first opportunity, wind through farmyards, past rampant lilac rhododendron; still not a soul in sight. It’s been hours, we’re dusty and suspect blisters, but back at the cars we decide to finish where we started – at the Brigands. We down blissfully cold lime and soda, then sip a huge pot of tea, and turn home, happy with our hike strike.

Exactly three weeks later, I’m driving home a little earlier than usual, worried by the unbelievable news that an MP has been brutally attacked in broad daylight. Between Machynlleth and Mallwyd, rain batters the windscreen so hard I can barely see the road. Radio 4 is rolling news, and Andrew Mitchell is already talking about Jo Cox in the past tense when the interviewer suddenly cuts to a police statement announcing that she has died of her injuries. Moments later I’m at the Brigands again, racing in through the rain. I order a coffee, look round at the people already there, a dog asleep at their feet, and think they don’t know yet. I scroll through the news, through Twitter, and the sheer horror and grief is both paralysing and strangely comforting; strangers connected across who knows where in a shared sadness.

I look out of the front window towards the estuary, which is filled with mist. In literally hundreds of through-journeys, I don’t think this meeting point of roads, and clouds, has ever looked so grey. A couple sit down at the table next to me, start to discuss tonight’s menu. I think of Catherine Hutton, watching people as well as places:

That you may not stand astonished at my prodigious knowledge of this principality, considering the short time I have been in it I will let you into the secret. The wind whistled all night among the mountains, by which Mallwyd is environed; the rain beat against my casement; and I requested my father to pass the day here. I have spent the rainy part of it in studying the inhabitants; and the fair, in acquiring some idea of their country.