Kirsty McHugh is a first-year doctoral research student at the University of Wales Centre for Advanced Welsh & Celtic Studies. She is part of the AHRC Curious Travellers project. Here, she adapts her paper from the inaugural CRECS Conference for our blog.

My research focuses on manuscript journals, diaries and letters recording the experiences of individuals and groups travelling in Scotland and Wales in the Romantic period. Since beginning my research degree in October 2015 I’ve become aware of the unique opportunities that exploring this topic affords, but also its challenges—in part, due to the nature of travel writing, but also because existing research has been largely based on published travel writing. Here I offer a brief overview of where my research has led me thus far.

Traditionally local and social historians have looked to travel accounts, especially tours of Britain, for evidence of what a particular place was like at a certain time. They can take at face-value that the descriptions given are real, up-to-date, and accurate; they rarely explore who generated the account and why.

Tours of Scotland and Wales offered tourists the possibility of exploring unfamiliar areas of Britain and encountering wild, sublime, or picturesque landscapes and their inhabitants. However, travel accounts are rarely uncomplicated evidence. Information was not always gathered from personal experience, but from books, local people or travelling companions – and sometimes written down long after the journey itself. Through comparison of a small number of travel accounts I hope to shed light on the extent to which individuals reacted uniquely to people and places, and how they were affected by the wider influences of the period.

I got particularly interested in multiple accounts of the same journey, An example in York Archives is the 1796 Scottish tour journals of 17-year-old Jonathan Gray and his father William. William’s entry for 15 August focuses on the distances involved, the quality of the inns and the cultivation of the country, particularly the variety of trees. His son writes in a much livelier and eclectic style, displaying great curiosity about a number of areas. An extract from his entry for the same day reads:

We now parted from the Scotch gentleman who had been our agreeable companion. If I were to judge the Scotch from him in should think them rather like the French, gay and debonair. We were informed that 2 quarts of strawberries which in York would probably cost 2/6, at Edinburgh would cost only 6d. This was rather mortifying to a lover of strawberries the season for which is now over. Eggs in Scotland are very cheap, & generally eaten at breakfast. A gentleman once desired that a pennyworth of eggs might be boiled for his breakfast; when nine & thirty were set on the table. As an instance among many others which might be mentioned of Scotch & Northumbrian curiosity, is the following. At the turnpike thro’ which we passed out of England into Scotland [our servant] Paul was asked are those English men? Were they ever in Scotland before? Have you ever been in Scotland? The Scotch men seem as curious as English women. No doubt we were very much pitied never to have been before in the finest country in the world.
—Travel Journals from a Tour of Scotland by Jonathan Gray (1796), York Archives GRF/6/2. With permission of Explore York Libraries and Archives

Once I began to read more about the study of travel writing I learned about post-colonial theory and a growing awareness that through describing encounters with the ‘other’ travel writing can record the writer negotiating and documenting their own identity. Understandably, however, much of the academic study of travel writing which has emerged in the last 30 or so years has focussed on published works. Although it has been argued that many authors of travel books were amateurs, the focus has also tended to be on travel works by well-known literary figures such as Wollstonecraft or Wordsworth, potentially providing an atypical picture of travel and its literary products in the period.

The manuscript tours I have located provide an opportunity to look at the travel of the middling sort, many of whom had no literary aspirations. Looking at handwritten material – I was struck by: the difficulty in ascertaining the reason behind the creation of the record and the physicality of the item and its form. 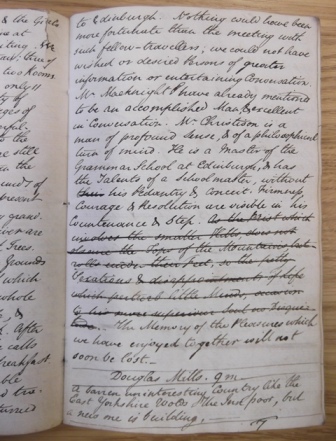 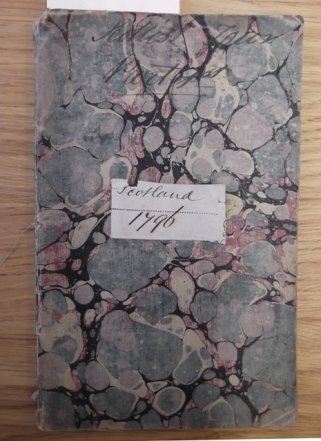 Travel Journal from a Tour of Scotland by Jonathan Gray (1796), York Archives GRF/6/2. With permission of Explore York Libraries and Archives

Sometimes the author kindly tells us why they are keeping a journal, Eliza Dawson for example writes in 1786:

It is natural to suppose a Girl of sixteen, who has never been above thirty miles from home, should form sanguine expectations from a journey of eight hundred. As for me who answer that description, I anticipate a prodigious deal of pleasure from it—and therefore have determin’d to set down every trifling circumstance, that affords me the least momentary entertainment.
—A Tour through part of England and of Scotland by Eliza Dawson in the year 1786, NLS Acc.12017

It can be assumed that in addressing a real or imagined audience travel journals like this are in some sense designed for sharing amongst a limited audience, probably friends and family.

Over the last 10 years or so research has convincingly shown that manuscript and print culture existed alongside each other in the 18th and early 19th century. Alongside a narrative, both published and unpublished records of travel can incorporate lists of inns, tables of distances, lists of dialect words, illustrations etc. However, this is often exaggerated in manuscript tours and some content can be dull, practical or only of interest to the author. Tourists might also attempt to capture their experiences by pasting in prints, making drawings, or enclosing momentos such as pressed flowers. So the physical artefact of the travel journal or diary can take on an additional significance to the words it contains.

Prints of Glasgow pasted into William Beamont’s travel journal ‘My tour through some parts of Scotland and Ireland (1825), Warrington Library MS288

And in creating a record of that travel experience the author’s also created a record of one episode in their lives, meaning that travel writing is often also ‘life writing’. After the tour is over these travels can continue to exert influence on individual’s lives and their sense of personal identity. Richard Vaughan Yates of Liverpool, wrote rather poetically of this intention, in the journal of his 1805 tour of Wales:

When the admirer of nature gazes in rapture upon a scene remarkable for its beauty or grandeur, he says within himself “surely, I shall never forget this.” But memory is treacherous; when he returns to serious occupations, the landscapes which had been painted on his imagination in such lively colours, gradually fade away, and, as the morning tints vanish before the splendour of the sun, give place to more important objects. In order to preserve the remembrance of scenes, on which I intend to reflect in the intervals of business, I took the following notes as we were on our journey…
—Memoranda of a tour in North & South Wales and parts of England & Ireland, 12th May to 22d June 1805, NLW MS 687b

Images and quotations from the collections of: