Kirsty McHugh’s work has added to the many references to the inns at Cernioge. These illustrate just how many references can survive for just one building, even one in a remote place such as this. Although many of the descriptions are very brief, in combination they provide a valuable record of the inn and the services provided by its occupants.

The original Inn at Cernioge was situated in a very bleak location close to one of the highest points on the road between Llangollen (23 miles) and Bangor (30 miles). This became part of Telford’s Irish road (London to Holyhead) which was improved at great expense between 1815 and 1825. The opening of the new line of road from Pont-y-Padock to Cernioge Mawr through Pentrefoelas was opened on the 8th April, 1821. 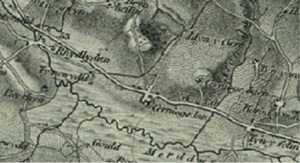 An inn at Cerniogie Mawr was licenced to sell alcohol in 1772. It was sometimes known as the Prince Llewellyn, but by 1827 was possibly named the King’s Arms. The most detailed description of this inn is supplied by a German visitor, Dr. Samuel Heinrich Spiker, who toured Wales in 1816:

‘The house was of a simple appearance, two stories in height, with only five windows in front …The interior arrangement of the house was altogether such as any private person might wish to imitate. We had our choice of several neat and even elegant bed rooms; and our pleasant and well-furnished sitting-room, on the right of the entrance below stairs.’

It seem likely that this is the ‘single’ inn, suitable for only one party of tourists, described by Lord John Henry Manners in 1797 and by Sir Richard Colt Hoare in 1801. A new inn and large stables were constructed at an unknown date when the road was improved, sometime after 1815, but it is thought that Telford was not responsible for the design of either.

Early visitors include the Rev. Richard Warner who ordered a freshly killed lamb to be roasted for him and his companion in August 1797 but doubted ‘whether a very keen appetite, produced by a fasting walk of 26 miles, will render it eatable.’ He, like others, described its location as solitary, being a convenient place for coaches to stop on the Irish road.

An anonymous lady tourist thought the inn delightful when she stayed there in 1811, and T.J. and B. Parke thought it very good in 1813. For the German tourist Dr. Samuel Heinrich Spiker it was one of the highlights of his tour of 1816: ‘I can truly say that [I had at Cernioge] some of the most agreeable hours I enjoyed during my stay in England [sic]. The interior as well as the exterior of the house were quite calculated to illustrate the meaning of that untranslatable word “comfort,” of which an idea can be formed only in England.’

Harriet Alderson, companion to Lady Fitzherbert, found the accommodation excellent in 1818; Lady Philadelphia Cotton described it as an ‘excellent in all respects’ in 1819 and Charles Octavius Swinnerton Morgan of Tredegar had a capital breakfast at this ‘magnificent’ inn in 1821. Three sisters, Mary, Bessy and Lucy Holland of Plas Penrhyn, cousins of Elizabeth Gaskell, found the inn ‘a little Paradise in the Wilderness‘ during their journey to Barmouth in 1823 and the 12-year old Eleanor Bagot (who wrote a very mature account of a visit to north Wales in 1827) noted: ‘From [Corwen] to Cernioge is flat and bleak, except here and there a good specimen of rock. We found an excellent dinner prepared for us, of which none of our party were at all unwilling to partake; I must add that the Inn is very clean and comfortable.’ Thomas Roscoe recorded that in about 1836 it was very busy:

Having previously heard of the excellence of this house of entertainment, I resolved to rest myself for a day or two. This place had a decidedly English appearance, for in the yard were four large ricks of hay (an extraordinary sight in Wales), extensive and well-built stabling, and the arrivals and departures were so frequent as to keep up the bustling excitement of a high thoroughfare.

And some dissatisfied guests…

When John Henry Manners, the fifth Duke of Rutland, accompanied by Lord Arthur Somerset and two others, arrived at the inn at 6pm on the 27th September, 1797, they were pleased to find that there was no one else there because it was so small, but surprised that there was no port wine in the house: they expected to be served wine at an inn on a highroad.

In 1805, William Fordyce Mavor described the inn as ‘very ordinary, where there is little attention and less accommodation’ and complained that he and his companions were almost suffocated by the fumes from the turf fire.

One of the few others who were not satisfied with the inn was Millicent Bant who accompanied Lady Wilson on a tour of Wales in 1806: she described the inn as miserable. Her dissatisfaction might have been influenced by her expectations, the weather, comparison with better inns and her general state of mind (which might have come about as a result of being for so long with her irritable employee), but it is also possible that the landlord or landlady were simply unable to satisfy their visitors’ needs that day. However, during a visit to the inn in 1815, Richard Grenville, 1st Duke of Buckingham and Chandos, was convinced that the landlord was a rogue. He wrote:

‘We meant to have gone on to Oswestry tonight, but arrived too late here owing to a resolute attempt made by the landlord of Cernioge Mawr to make us sleep there, and a more resolute resistance on our part – He swore he had no horses, we swore he did – He swore that what he had were just come in from a journey – We swore he lied again inasmuch as we had [seen] they had been in above an hour – He swore again we should not have them, we swore that he should not be the better for it as we would sit in the chaise and wait there until our former horses were refreshed which should take us back to Capel Curig where we would go and sleep rather than be bullied by him – This took up an hour and he kept us another hour in the chaise waiting to see if we should be as good as our word. He saw at length that we were sturdy so gave us horses which brought us at a snail’s pace here.’

Dr. Samuel Heinrich Spiker’s description of the building in 1816 was accompanied by an account of the grounds: ‘before [the house] was a level court-yard, laid with gravel, in which peacocks, turkies, pigeons, and other poultry strutted about in rural security. Three fine old maple trees formed a row at one side of the door, and a bench under them invited to repose under their shade. A little grove opposite to the house formed a kind of partition towards the high road.’

In 1831 Hannah Williams described the inn as ‘large and handsome … in the midst of a wild moorland district. Around the house are some good plantations, intersected with walks, and in the front a lake, on which we noticed some curious foreign geese, which we understood were from South Carolina.’ Tourists were particularly fond of woodland and ‘pieces’ of water, and it is possible that the vegetation had matured by this date. The energetic Thomas Letts (ancestor of the firm who produced Letts’ diaries), made four visits to North Wales between 1832 and 1847. In 1833 he noted that the inn was ‘a dashing place with carriage drive, lawns, peacocks etc.’ In the same year, Catherine Sinclair thought that the garden was neat but the house was only ‘tolerably good’, even though ‘So many travellers were assembled at this place … that it was quite a favour on the landlord’s part to afford us accommodation.’ She also noted the sign above the door of the Inn: ‘By act of Parliament. Licenced to be drunk on the premises’ which was seen at every alehouse along the highroad.

Christopher Rawson’s reference to a harp player at the inn in 1817 is one of several. In 1791 ‘A.B.’ was entertained by a blind harper. As he pointed out, most north Wales inns had someone who could play the harp (probably between other duties). They played in the hall of inns for hours on end in the hope of being given a generous tip by the guests – often one shilling. In about 1800 an anonymous tourist rejoiced at finding a harper at the inn and made some comments on the differences between Welsh and English harps. 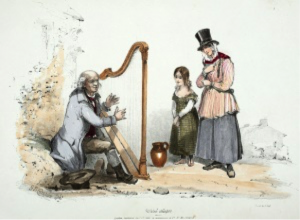 In 1816 Dr Samuel Spiker was entertained by harp music played by the landlady’s daughter (presumably Miss Weaver). A harper is said to have entertained Princess Victoria there on her journey to Beaumaris in 1832. In 1837 Elizabeth Bower described the harper as ‘another old Welsh man, an even better performer than our friend at Llangollen’ although she didn’t think his instruments was quite up to London standards. The last recorded visitor to the inn was John Parry, (Bardd Alaw, 1776-1851) in 1838. He was the author of ‘An Account of the Rise and Progress of the Harp’ (1834) and it is a great shame that he was not entertained by a harper at this inn, because his comments would have been very well informed (unless he heard a performance not worthy of comment).

(For more on harpers in Welsh inns see here.)

The building of the A5 across the middle of north Wales displaced the north coast road (now the A55) as the main route to Holyhead for those coming from central and southern England. Likewise, the railway along the north coast from Chester all the way to Holyhead, constructed from 1844, displaced much of the traffic on the A5, leaving some of the inns on this fine road bereft of travellers. John Parry (Bardd Alaw) described the inn as ‘comfortable’ when he stayed there in August, 1838 but it appears that the stage coach service was abandoned in 1839 and the Cernioge Inn victualler’s licence was lost to the Pentrefoelas Arms, three miles to the west, in the same year. Its closure might have been influenced by the fact that Mr Job Weaver, Inn keeper was found to be of unsound mind in 1832.

Full details of references to Cernioge Inn may be found here.