Inspired by the thought of north Wales, mountains and Thomas Pennant, we get up early and luckily find it to be a sunny day.  Before we start on our journey from Borth to Penmachno in Gwynedd my travelling companion selects a box-set of Harry Potter CDs to listen to in the car.

The journey takes two hours. As we sit in comfort, views of Corris, Cader Idris, Dolgellau, Trawsfynydd, Blaenau Festiniog, and its dramatic industrial spoil, are accompanied by a tale of wizards, spells, dragons and life threatening beasts. Thrilled and excited in our magic, isolated bubble we stop at Dolbadarn Castle.

(to build in stone was expensive, a symbol of wealth and power) 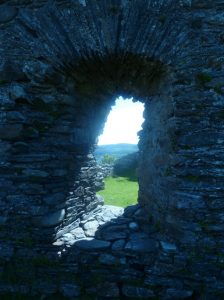 and laid claim to the land, displaying his power.

What were the needs of Llewelyn to mark out his territory?

Today this is a destination, a place to ‘pull in’, pay £3.00, climb up the steep craggy incline and read about the history of the stone fortification on a laminated text panel. With a mind filled with young wizarding adventures it is difficult to focus on the hardship of living in this barren landscape, until my son asks, ‘where did they go to the toilet?’

We peer down some rectangular holes at the back of the tower.

‘Nothing makes the earth seem so spacious as to have friends at a distance; They make the latitudes and longitudes’.

Thomas Pennant had a network of knowledgeable and artistic friends that he could call upon to help him ‘see’, record and understand the landscape while he travelled through Wales.

Today we have arranged to meet an artist and good friend from north Wales, Rorik Smith (http://www.roriksmith.co.uk/). He arrives at central Penmachno from Llandudno at the allotted time, in his white van.  But we have decided to view the landscape from a different perspective.

We are going to travel by horse.

But first, we picnic in the old church of St Tudclud’s , the church, at the centre of the village. It has recently been reopened, after a fifteen year gap, by the efforts of local people. It now acts as a community centre as well as a house of prayer. It has a coffee machine, which offers cappuccino, expresso, latte or hot chocolate to the weary traveller.

The most visually interesting is the long narrow stone said to mark the burial place of Iorwerth ab Owen Gwynedd (11-45-1174). The ancient stone has a symbol very similar to the London underground logo, a circle with a horizontal bar through it. It dates from the 13th century. 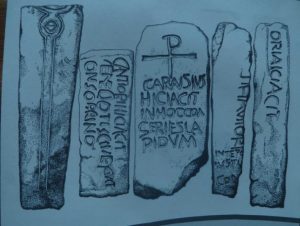 He was also known as Iorwerth Drwyndwn, ‘he with the broken nose’. Apparently he was so ugly that he was not allowed to inherit the crown. It is claimed that he was killed in battle near Penmachno.

His son was more successful and became the man to unite Wales- Llywelyn the Great, presumably he looked OK!

We make our way to the remote valley of Wybnant following the clear signs to Ty Mawr, National Trust Property and packaged history location, another destination, where Bishop William Morgan (1588-1620) is said to have lived and translated the Bible into Welsh.

But before we get there we stop at Gwydyr Stables and take to our steeds.

Our guide for the journey into the region is a tattooed lady adorned with images of Pegasus, flanked by equally impressive images of parents Poseidon and Medusa, which cover her entire back. If I remember the Greek legends correctly the rider of the winged horse falls off while pursuing a monster! For the next three hours we follow the undulating blue and green illustrations. I hold onto the reins of my horse in fear of tumbling and grip firmly with my knees. 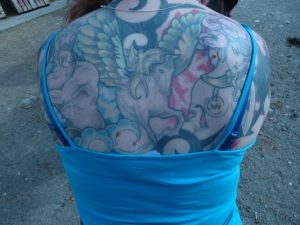 The sounds of the countryside and rhythm of the moving horses change my perception. My mind wanders and along a wooded hillside we ascend. Surrounded by mosses, pools, ferns, creeping ivy and glimpsing the distance crags and rocky mountains. I am reminded of the story of the beast who once was said to dominate the lives of those who lived here.

‘Y Wiber’, or flying snake, was so terrible that a reward was offered to anyone who could rid the area of this threat.

A handsome young farm boy named Owen ap Gruffydd took up the challenge. After three separate warnings, from a local wizard, that he would face mortal danger Owen remained fearless.

He searched the valley and was caught by surprize. The flying creature suddenly appeared from above and bit him, causing him to stumble and fall onto the jagged outcrop below. His neck snapped like a branch. He tumbled into the swirling river below and drowned. His blood flowed swiftly downstream. The monster drank its fill before resting nearby.

With hundreds of arrows and sharpened spears Owens family and friends came and destroyed the creature.

It was never seen again. The valley retains the name Wibernant.

But today the peaceful valley is filled with sunshine.

Allowing ourselves the luxury of riding this route on horseback gives us the opportunity to really appreciate our surroundings.

These horses know the route and the incline of the land, I begin to relax:

(Full of strength, that is his characteristic,
a red lion of the same colour as stags.
He runs well over two parks, sure his footing,
very good is his trot carrying a blind man.
He won’t shy away from, even though I’m so blind,
a man or a wall, although I cannot see. Guto Glyn)

This is about the journey and not the destination. 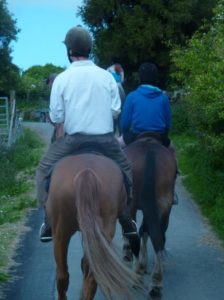 Taking our time gives us the chance to feel what it is like to work with the animal and travel together, to feel and see thing differently. No wonder Pennant spent time appreciating what he found.

I wonder if Bishop Morgan, his house stands below us, ever thought of the flying snake and the young Owen when he translated the story of Adam and Eve being threatened by another serpent.

What does speaking Welsh mean to me? my mother tongue. Welsh  seems to live in this valley I can hear it in the river. Pennant had the motto ‘ Heb Duw, heb dim’ (Without God, without anything)  inscribed on his family home, so how strong were his religious and Welsh beliefs?

As we steer our way along the well-worn path we follow a dry stone wall covered in thick moss buried in layers of growth.

Does this keep us in or keep us out?

Ancient boundaries are formed and our lives are ruled by established barriers, but these can be broken and changed. Sometimes the old walls fall down and the stones tumble to the ground.

And set the wall between us once again

We keep the wall between us as we go……’

This landscape is covered in miles of meandering walls and each so considered and carefully made. They are such beautiful and special constructions but hardly noticed as they become part of the landscape, nestling into the greenery. Like lines drawn on a map they mark the land but also keep the order of a network of old established boundaries.

Thomas Pennant must surely have walked or ridden past many of these walls, farms, dwellings, castles. He collected as much information on all manner of topics to try to understand his surroundings.

What were his thoughts about encouraging visitors to Wales? 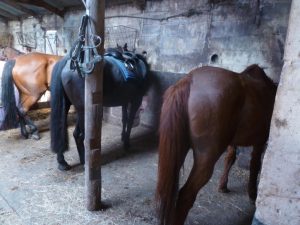 Diwedd:
Walls shape, not only the landscape, but the cultural identity of the area. When we think of the way in which people move from one place to another crossing farms, parishes, estates, and counties they carry with them their own stories of the past.

The curious traveller will observe and absorb as much as possible to try to make sense of the world. Our short journey ends where it began, in the twenty-first century: time past is so hard to understand.

Time present is difficult too. We return to the speed of our car and two hours later watch the stars in a clear sky back in Borth, pointing out Pegasus in the northern sky and wondering what stories other cultures have about the creation of the universe.