The Curious Travellers team is excited to announce the release of our interactive map of Thomas Pennant’s 1769 and 1772 tours of Scotland, developed by Chris Fleet at the National Library of Scotland’s Map Collections. The split-screen viewer displays itineraries constructed by the team from Pennant’s two Scottish tours, alongside a range of geo-referenced historical maps from the National Library’s extensive collections, including Aaron Arrowsmith’s highly detailed 1807 Map of Scotland, and a map specially commissioned by Pennant to accompany his second tour. Around 800 individual markers pinpoint locations visited by Pennant during his two tours (viewable all at once or by volume), with further information on each location accessible by selecting its marker. While the left-hand pane of the viewer shows these points on a modern map, the right-hand pane simultaneously shows the equivalent location on the selected historical map. We hope you enjoy exploring both Pennant’s Scottish tours and the maps themselves, which reveal fascinating insights into the cartographical and geographical cultures of the period, as well as a rich sense of the country that Pennant must have experienced on his way around Scotland in 1769 and 1772. We would also like to offer our warmest thanks and acknowledgments to Chris Fleet and the team at the National Library’s Map Collections, whose hard work and generosity have made this possible. 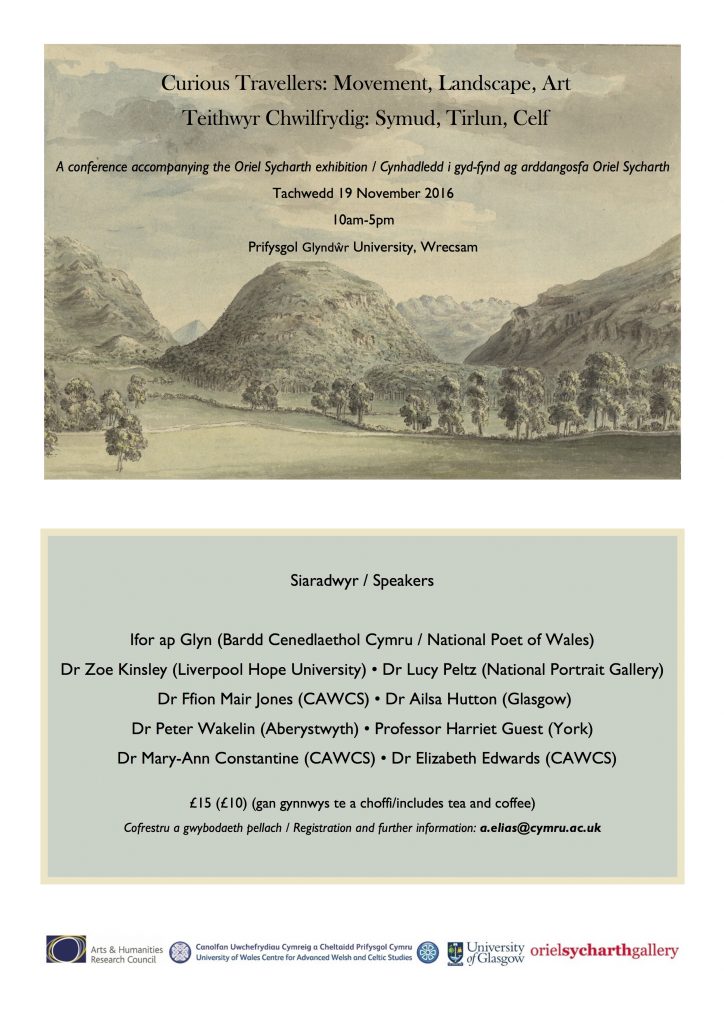 It’s been some 18 months in the making, but our exhibition of artistic responses to Thomas Pennant’s Tour in Wales – ‘Movement, Landscape, Art’ – opens shortly. Here’s a brief preview of some of the works that will be on show at Oriel Sycharth, Glyndŵr University (10 October – 16 December; http://www.glyndwr.ac.uk/OrielSycharthGallery/), and some reflections on the ideas and processes that lie behind them.

The works comprising ‘Movement, Landscape, Art’ are striking, eclectic, moving, and thought-provoking. We had no idea how the thirteen artists would reply to Pennant, but the works inspired by him in the exhibition couldn’t range more widely – from painting and pottery to sound and film art. We’ve recently been working on the artists’ statements accompanying their work, and these have been no less a revelation to us than the works themselves. Key themes thread through these accounts: the slipperiness of the past, always just over that hill, disappearing from view. The thrill, nonetheless, of glimpsing hidden stories, places, scenes. The responsibility (obligation even) for telling forgotten histories of hardship and suffering. Or the enduring quality of the past – not necessarily lost, but sometimes only veiled. And always comprehensible, in one way or another, from a twenty-first-century perspective.

It’s been wonderful to see, in private conversations as well as in the works themselves, or the blogs that chart the process of creating them, how deeply Pennant has sunk into the thoughts and practice of some of the artists. Engaging with his travel writing has taken them to new places – geographically and conceptually – or else inspired them to see familiar ones with fresh eyes.

Every piece within the exhibition embodies these discoveries: here are just a few examples from the many within the show. Ali Lochhead’s prints, based on pigments ground from rock collected at Parys Mountain, evoke the traumatic history of mining, in highly dramatic (but natural) colours very different from her previous work on lead mines. Helen Pugh’s embroidery delicately captures Pennant the naturalist in springtime, in bright green thread and ash seedpods. Barbara Matthew’s shallow-space installations in slate and paint record, and confront, the changing nature of one particular landscape, now far less accessible than it was when Pennant travelled through it. Thomas Pennant himself peers out in miniature from a battered travelling case, surrounded (trapped?) by found objects – broken china, a feather – in the work of Stuart Evans.

These pieces, along with those of nine other exhibiting artists, are beautiful, and unsettling, as they overlay past and present, text and image. Created over the course of 2016, they bring history to life at an uncertain moment in our own time. 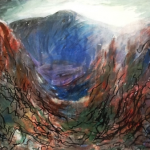 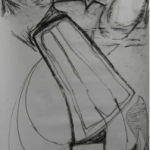 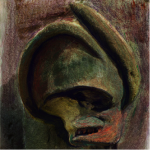 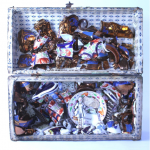 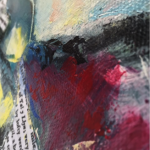 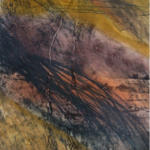 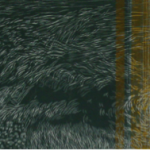 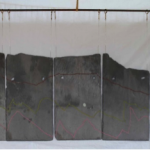 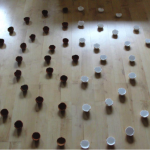 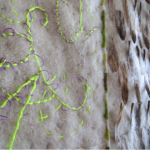 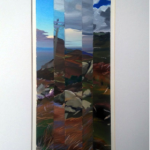 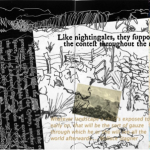 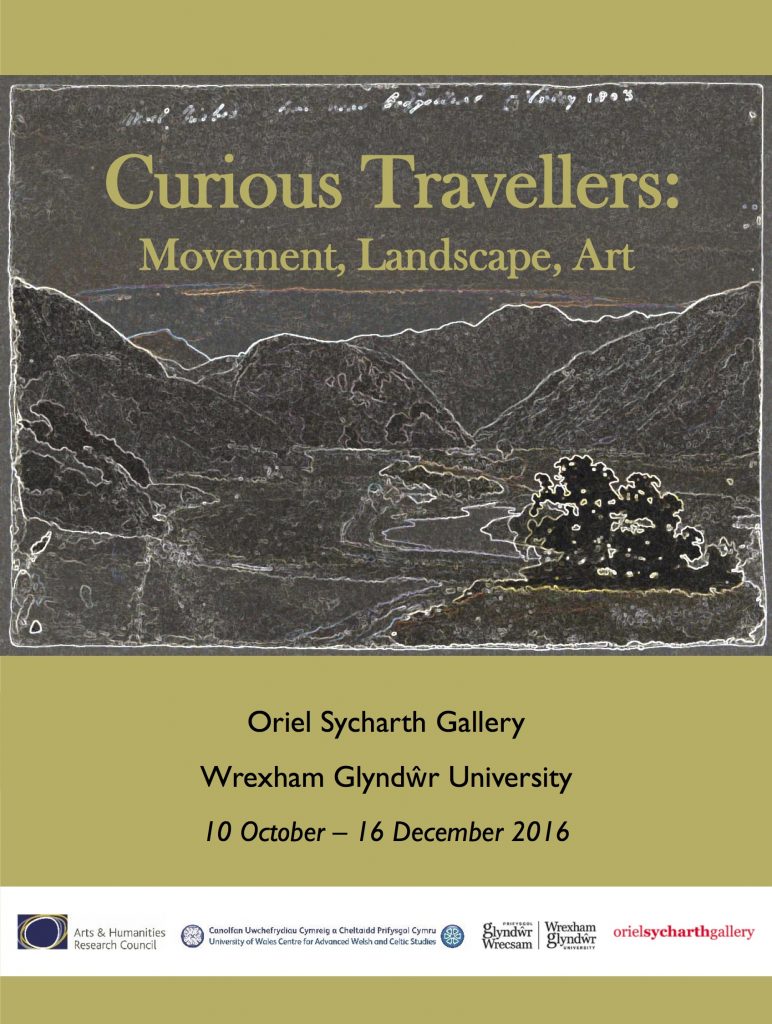 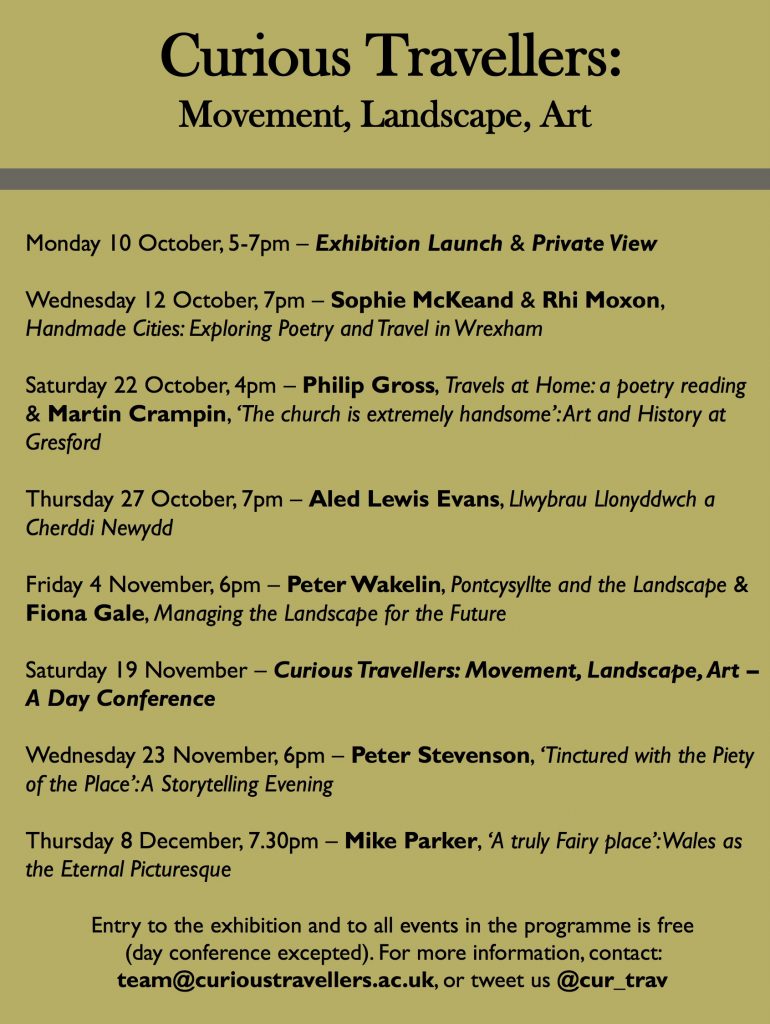 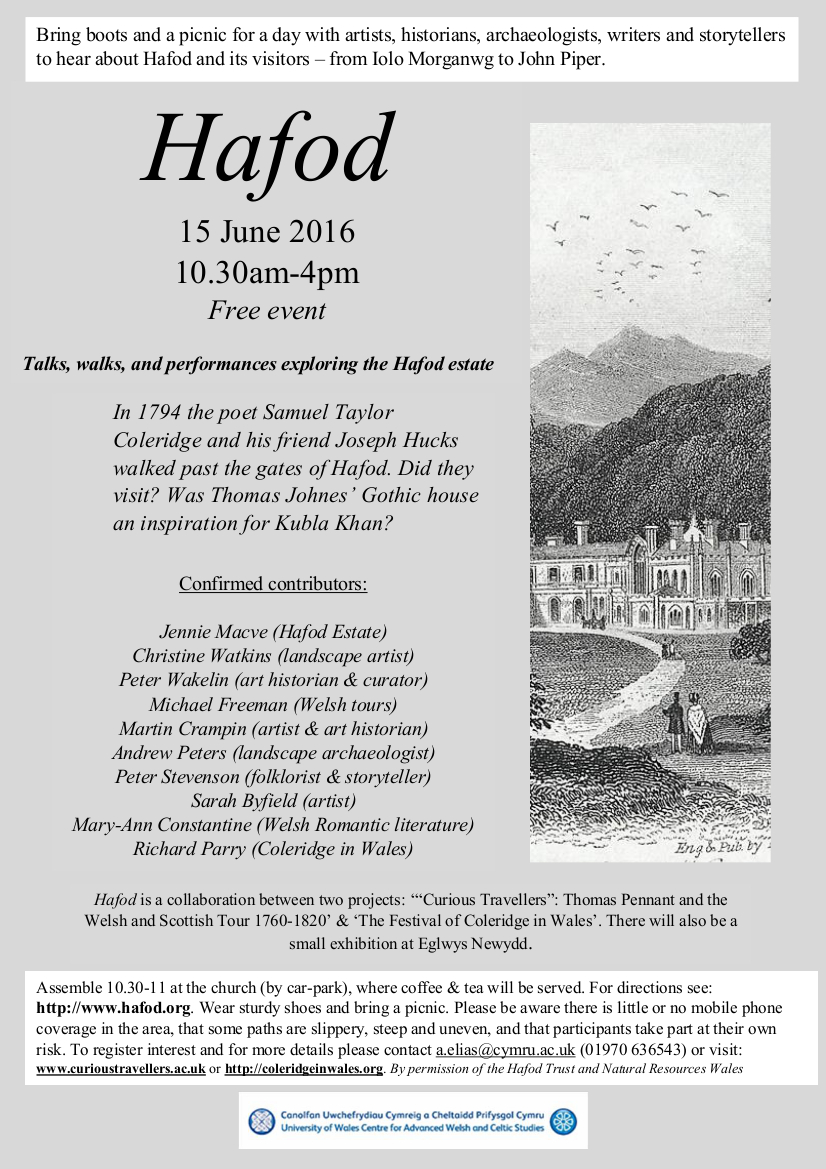 The day will consist of a leisurely walk of about four miles in total, with frequent stops for talks and performances. Many (though not all) of these will happen during the first part of the day, so participants could leave earlier if desired. We will aim to have a lateish lunch (bring a picnic) about 1.15. We will be following marked paths, but please be aware that some of these are steep and slippery – more so in the afternoon when we head up to the Cascade. There is no charge for the day, but contributions towards Eglwys Newydd and Hafod Trust would be welcome. There is NO mobile phone coverage: nearest landline is Hafod Estate Offices. Bring anoraks, sun-cream and midge-spray!

Times below are very approximate and our progress will depend on the number of people who turn up. Besides the scheduled talks there will be more impromptu readings / songs as we walk. Any further queries please contact mary-ann.constantine@cymru.ac.uk.

10.30: Gather at Eglwys Newydd church: parking and toilet available. The Friends of Eglwys Newydd have organized a small exhibition and are kindly offering tea and coffee. The artist Sarah Byfield may be showing some of her maps.

10.50: Jennie MacVe: welcome on behalf of the Hafod Trust

11.50 – 12.30: Short talks by Peter Wakelin (the painter John Piper at Hafod) and Peter Stevenson (current film project on stories from the area).

12.30 – 12.50: Outside the ruins of the house: landscape archaeologist Andy Peters on the Treescapes at Hafod.

12.50 -1.10 Easy walk to Mrs Johnes’ Flower Garden. Picnic here if nice, and a chance to explore the work of artist Christine Watkins, who will be making a labyrinth on the grass.

Short talk by Michael Freeman on tourists to Wales.

2.15 pm: Walk (20-30 minutes) from garden, over bridge and loop right, cutting diagonally up to Gentleman’s Walk, and along to the wooded knoll by Pant Melyn.

3pm onwards. From here people can visit the Cavern Cascade (10 minutes’ walk) in small groups – note the path is steep and slippery.

3.30: Option to head directly or indirectly back to Church – the latter route will take in the Chain Bridge and the newly restored Gothic arch, and will probably add 20-30 minutes to the walk. 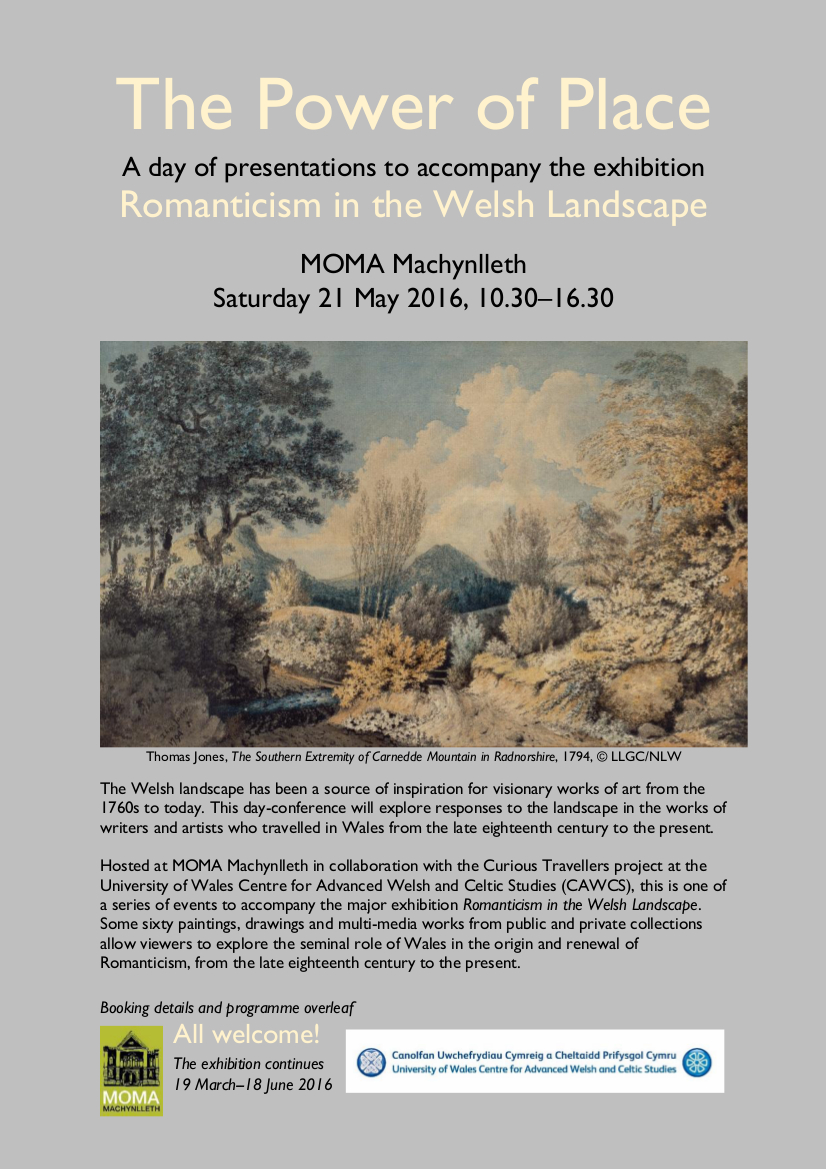 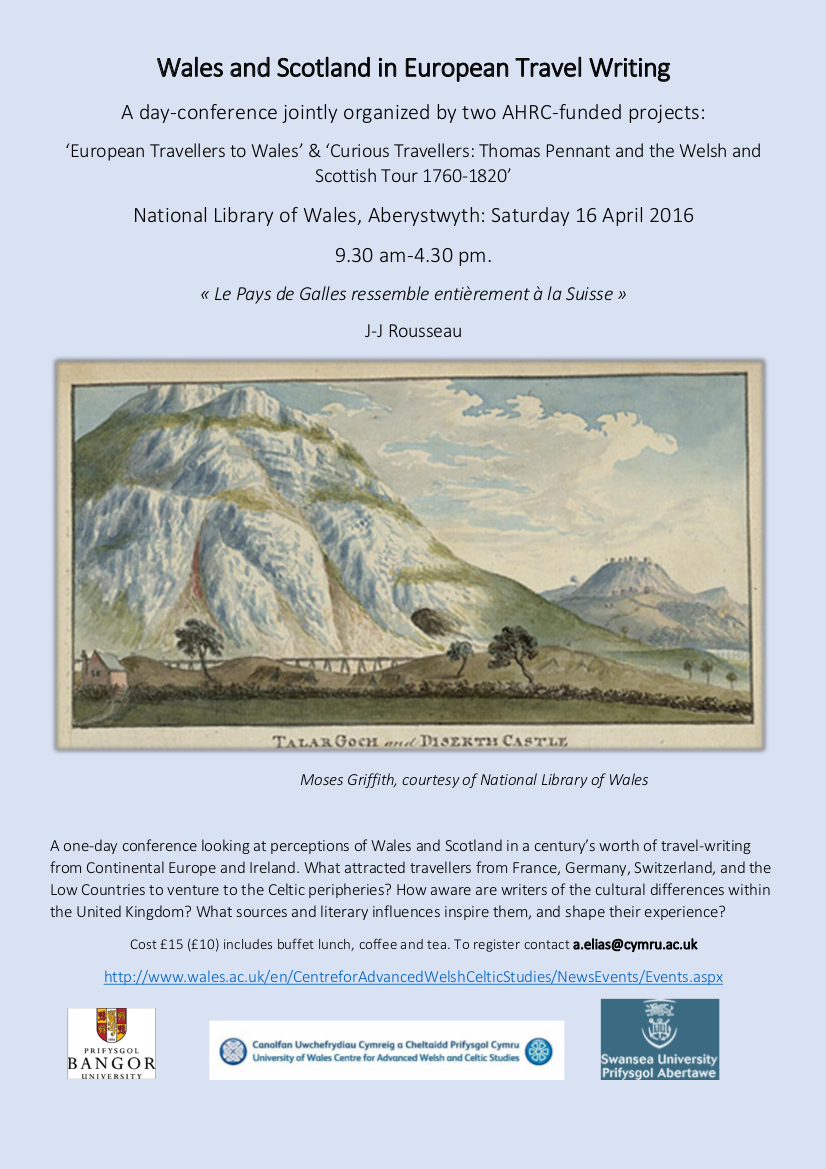 As part of the Curious Travellers research project, we’re encouraging members of the public (as well as researchers) to follow in the footsteps of Thomas Pennant on his tours through 18th century Scotland, Wales, England or Ireland. We’d love to hear your account of your experiences of landscape, people, places, archaeology, natural environment, industrial sites, etc associated with Pennant’s tours – perhaps in the spirit of modern travellers like W.G. Sebald, Rob Mcfarlane, Kathleen Jamie, or Iain Sinclair! We welcome anything from the barest of blogs to more detailed travel accounts, in prose or verse, where possible illustrated with photographs or (even better) your own drawings or sketches.

As a starter, Alex Deans and Nigel Leask have written up their two day’s tour following Pennant in northern Argyll – we hope that will inspire others.

If you would like to contribute to this blog then please get in touch.

Pennant’s itineraries are published at the end of this tours, and we’ll shortly be uploading a map showing his routes in Scotland and Wales. Bon voyage!

The AHRC-funded ‘Curious Travellers’ project is pleased to advertise a fully-funded PhD, to start 1st October 2015, exploring any aspect of C18th and Romantic-period tours to Wales and Scotland. The post will be based in the University of Wales Centre for Advanced Welsh and Celtic Studies (CAWCS) in Aberystwyth, and will run for three years. We invite applicants to offer ideas from a broad spectrum of possible research topics within the main subject of ‘The Welsh and Scottish Tour 1760-1820’. Suggestions might include (but are not restricted to):

Perceptions of Wales and the Welsh/ Scotland and the Scots in written tours, published and unpublished; the experience of female travellers; antiquarian recoveries of early Britain; the writings of Thomas Pennant; correspondence and knowledge networks; encounters with Welsh/Gaelic literature or song; natural history writing in the tours; enlightenment science and domestic travel; topographical art and artists. A candidate interested in the visual art aspects of the project would have the possibility of working closely with the topographical art collections in the national libraries and museums of Wales and Scotland.

The successful candidate will work alongside a team of researchers currently engaged in the AHRC-funded project “Curious Travellers: Thomas Pennant and the Welsh and Scottish Tour (1760-1820)”, jointly run by CAWCS and the University of Glasgow, and led by Dr Mary-Ann Constantine and Professor Nigel Leask. The deadline for applications is 30 April 2015: for further information about the project and details of the award please contact a.elias@cymru.ac.uk

“I beg to be considered not as a Topographer but as a curious traveller willing to collect all that a traveller may be supposed to do in his voyage; I am the first that attempted travels at home, therefore earnestly wish for accuracy.”

This four-year AHRC-funded research project, launched in September 2014 and jointly run by the University of Wales Centre for Advanced Welsh and Celtic Studies (CAWCS) and the University of Glasgow, will explore Romantic-period accounts of journeys into Wales and Scotland. Our focus is on the writings of the Flintshire naturalist and antiquarian Thomas Pennant (1726-1798), whose published Tours of both countries did so much to awaken public interest in the ‘peripheries’ of Britain. We aim to open a window onto the vivid and often entertaining accounts of scores of ‘curious travellers’ who headed for the edges of the British Isles in search of the primitive, the picturesque and the sublime–and often found the foreign, and the unsettling, surprisingly close to home.

This website will develop over the course of the project as a portal to the project as a whole, linking through to a wide range of texts, databases, bibliographies, educational material for schools, pictures, pod-casts and other resources. To learn more about our aims and our planned outputs go to About the Project.

We will share our work in progress through a wide range of public talks and events, from international academic conferences to local events in museums, libraries and village halls. We are also asking people to get involved in Pennant Walks, following sections of the Welsh and Scottish itineraries. For information on past and upcoming activities see our Events page. 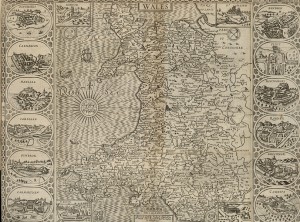 Romantic-period tours are a wonderfully rich resource, opening out into many different topics, from art and archaeology to natural history, politics, literature language and geology. We are keen to hear from any groups or individuals with an interest in Thomas Pennant or travel writing in this period: please contact us.