Mary Anne Eade’s Journal of a tour from Clapton through North Wales to Ireland recounts a journey made in the spring of 1802. The tour moves from London to north Wales, Dublin, County Wicklow, and back through Wales to its starting point. It’s an engaging piece, unusually sympathetic to Wales on the whole, and written both with an awareness of internal British boundaries – Wales is ‘another country, tho’ not another island’ – and a joyful sense of celebration. Harp music heard at the border town of Oswestry prompts Eade’s elation at the idea of crossing into ‘Wales, that land of wonders I had so long wished without hope to contemplate’. Francis James Sarjent’s 1811 print, ‘Entrance to the Vale of Llangollen’, below, gives a contemporary if perhaps exaggerated illustration of the route into Wales from Oswestry and Chirk.

Who was Mary Anne Eade? She was from a London merchant family background and belongs among the many home tourists who travelled in our period but isn’t known to us today beyond her surviving manuscript account. However, fragments of internal evidence about her life and situation make this a rich tour for other reasons. Pleasure is, predictably, an important part of this trip made partly ‘in quest of new beauties’, but the personal elements and emotional narratives of the text particularly stand out. A short preface, written by her husband, William, and dated March 1803, frames this tour and announces that Eade (b. 1778) has since died. The manuscript becomes a powerful personal memorial, an object of grief, as well as an account of a journey that, aside from the text, ‘now appears like a pleasing vision, impress’d indeed strongly upon the imagination, but without reality’. This preface colours the rest of the tour, in which Eade writes about her travel anxieties, including her dread of crossing the Irish Sea, and her pain at being away from her small son.

The manuscript was also written as a personal document to a younger sister, Eliza, in response to her tour of south Wales – not just an extended postcard, then, but also a form of gift exchange. Eade is aware that writing with a particular recipient in mind shapes her tour, and her experience of it: ‘I finish my little journal of a most delightful tour with regret because in finishing it I conclude a long imaginary conversation with you; which has possessed many charms for me’.

At over 23,000 words, this work is relatively long for a manuscript Welsh tour: the inclusion of an Irish tour pushes it to the longer end of the spectrum. The extract reproduced here comes from the early part of the tour and recounts some of Eade’s first impressions of Wales. 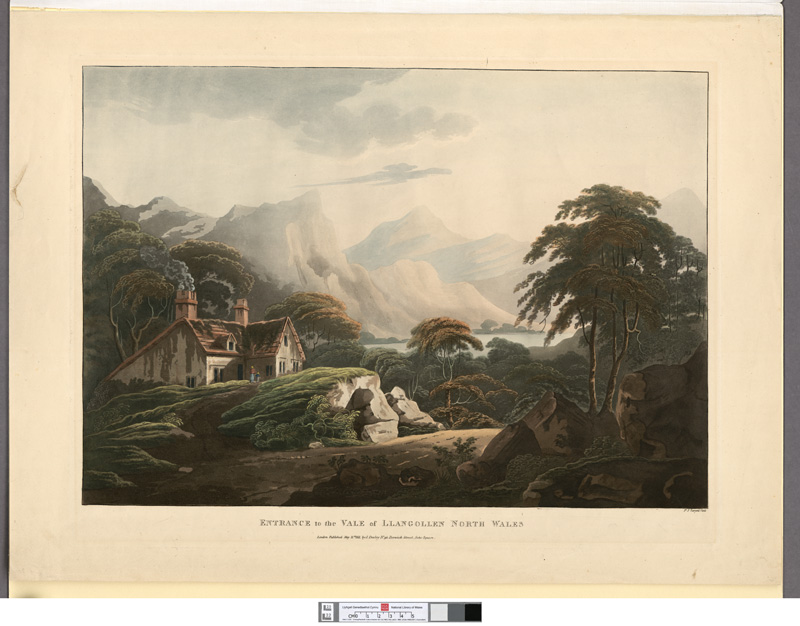 Mary Anne Eade, Journal of a tour from Clapton through North Wales to Ireland (1802). Source: National Library of Wales MS 22190B

19r
… We had a rainy ride from hence [Shrewsbury] to Oswestry, but my oil-silk so compleatly defended me from any ill effects of it, that I greatly enjoyed the reviving freshness it diffused, as well as the lovely country thro which we passed, which however was rather less beautiful than what we had seen in the morning. Thro’ all my ride to-day poor Bennet has been constantly in my thoughts; Shropshire the beloved spot of her nativity was I think often the theme of her praises, & I am sure she had cause to remember its charming

At Oswestry we took up our quarters at the Sir Watkin Williams Wynne’s Arms a new & most excellent Inn, one of the best indeed I ever saw; & here while satisfying our appetites with two delicate roast chickens, our ears were saluted by the sweet tones of the Welch Harp; my raptures at its first soft chords was extreme for independent of its own charms, I was in extasies [sic] at the certainty it gave me that Wales, that land of wonders I had so long wished without hope to contemplate, was actually within a few miles of us: think Eliza of your feelings on a like occasion, & judge of mine! Oswestry is a very poor town the last in England, but the dress & language of the people are more than half welch; & here on the borders of another country, tho’ not another island; at the distance of 183 miles.

20r
from the objects of my tenderest love, do you not think you were all present to my recollection? the dear remembrance of you added sweets to my repose, & my dear Eliza may be sure she was not the least thought of, tho’ the smiling image of my darling boy might dispute her claim to preeminence in my reverie.

Friday 21.st We left our comfortable inn this morning before breakfast, & I anticipated with delight our entrance into Wales, I had indeed awoken with one of Margarett’s [sic] happy feels which encreased upon me as we advanced every moment nearer & nearer to this beautiful principality: at the village of Chirk we entered it, & the scene that immediately opened on our view gave me a faint idea of its charms; the hills on every side enclosed the sweet valley of Ceriog [sic], which tho’ not very extensive, is delightful pretty a pretty [illegible] is

thrown across it which struck me the more as it was the first I had ever seen: soon after we had passed thro’ the valley we turned out of the high road to see Chirk Castle, the seat of Col:l Middleton, it is a fine old Castle & very well kept up, but after seeing Warwick it disappointed me; but the ride thro’ the park was delightful, & the view from the castle rich, romantic, & extensive it is said that seventeen counties may be seen from it. It is astonishing how soon the country changes on leaving England; I yesterday considered the hills of Shropshire as lofty & gazed on the rich country with ardent admiration, yet compared even with this entrance into Wales, the hills seem insignificant, & the country insipid. Soon after we regained the high road, we saw the

immense aqueduct which is building over the Vale of Llangollen from the Ellesmere canal, when compleat it will be a very noble work, at present it is in a very unfinished state. Since I have mentioned this celebrated valley, you will imagine my dear Eliza, that all the magic of Welch scenery was now fast opening on our view; but no imagination can form an idea half so exquisite as the prospects which continually encreased in beauty as we approached the poor village of Llangollen, poor in itself but rich in the charms of its situation. You might well tell me I could not possibly raise my expectations to a pitch suffering [?by/my] elevated, in thinking of Wales for though can never reach to half its beauties. The lofty mountains on each side this

exquisite valley are richly tufted with wood to the edge of the romantic Dee, which in this part gently murmurs over a pebbly bottom, frequently it can scarcely be seen to glitter thro’ the trees that overshadow its banks, & only its soothing music reveals its situation. The mountains on each side occasionally assumed a bolder character, & as if in disdain of ornament, show their rugged sides, covered only with their native rocks. Never did the heavens illuminate a lovelier morning than this, it seems sent on purpose to heighthen [sic] the charms of the scene; not one was lost on me, & no words “can paint the rapture of my soul” the whole way, I powerfully felt, that
“These scenes would work my soul’s eternal health,”
“And love, & gentleness, & joy impart”1

1 Slightly misquoted from James Beattie’s The Minstrel. See The Minstrel; Or, The Progress Of Genius. A Poem. Book 1 (1771), stanza X.