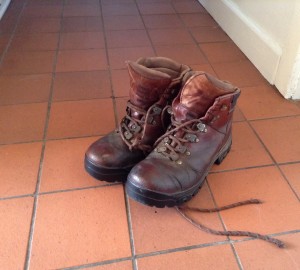 Shiny and ready to go

Having “expressed an interest”, as the saying has it, in the possibility of taking part in an exhibition of artwork relating to Pennant’s travels in North Wales, I discovered to my delight that he actually passed through the village where I live. Further reading of Volume II reveals that he did a sort of circular ride passing through Llansannan 3 miles to my north, round through Gwytherin, Pandy Tudur and Llangernyw, before reaching LlanfairTalHaearn three quarters of a mile down the hill from my house. Perfect for a reconstruction of that part of the Tour.

I’m an artist, working mainly with paint and print, and a lot of my work derives from walks made in the area around my home.  I now realise that have travelled along sections of Pennant’s tour on many occasions; reference to the 1:25,000 O.S. map shows that it should be possible to retrace his steps fairly faithfully, allowing for the changes in spelling of place names.  The route of the country lanes cannot have changed very much in 200-odd years, allowing for some arbitrary decisions about which ones were surfaced with Tarmacadam.  Many of the unsurfaced green lanes are still in use as footpaths and farm tracks.  Interestingly, there is a route mapped from Llansannan to Llangernyw as part of the modern North Wales Pilgrims’ Way, and it can be walked in a day. Getting from Llangernyw to LlanfairTH might be the killer, though.  Literally so if I walk along the “new” road between the villages, which was made as recently as the 1920s but has no footpath.

So: some pre-planning is required, and I fancy it may not be possible to stick to a strict schedule, or even complete the journey in a single day, what with the weather and the reductions in the bus timetables. Given that Pennant rode around the country, I don’t feel that it would be cheating to use a car for some stages of the journey. Apart from anything else, I will not be walking at the regulation three miles an hour if I’m making drawings, taking photographs and collecting “found objects” (artspeak for attractive odds and ends/souvenirs/rubbish scavenged for future use and inspiration, and destined inevitably for the compost heap). Best to take a gentle pottering approach, I think.

The map is folded, the sketchbook is ready, the boots are polished, and tomorrow should be Day One.