In analysing the composition of manuscript travel journals I have become particularly interested in the influence of novels, guidebooks and other literature on how tourists chronicle their travel experiences.

Two particular travellers, who made tours of Scotland and Wales in the Romantic period, Jonathan Gray (1779-1837, attorney from York) and Anne Lister (1791-1841, heiress to the Shibden Hall estate near Halifax) have left us rich sources for this studying this aspect of tour writing. 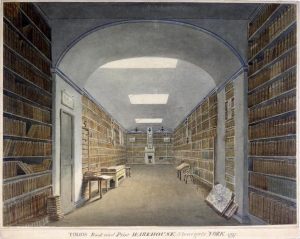 Todd’s bookshop in Stonegate, York, which Jonathan Gray is known to have frequented. Painted by Henry Cave in 1797. Image in public domain, from York Museums Trust website.

Publications and other print items associated with tourism were often produced for a very specific purpose and tourists’ interactions with them might be brief. We know Anne Lister retained the copy of Nicholson’s Cambrian Travellers Guide she purchased on her 1822 tour of Wales (it is listed in the auction catalogue of the Shibden Hall Library), however we do not know if she kept her copy of The Scottish Tourist & Itinerary. Since the information contained in guidebooks would quite quickly date their long-term value was limited. In her diary Anne records borrowing a guide to St Andrews when she visits the town – at 5 shillings the book is apparently too pricey for local booksellers to stock.

The keeper of the ruins … lent us the “Delineations of St Andrews” by James Grierson M.D. M.W.S. Cupar, 1823, 1 volume, 12o pp 224 price 5/ thought too dear by the booksellers there who refuse to buy so as to be obliged to sell it at this price & the publisher refuses it at less so there is difficultly about getting the work. (28 June 1828)

‘Ephemera’ such as broadsheets, posters and leaflets were by nature intended to be used and then thrown away. The owners of tourist sites often produced guides to their attractions – some of these might be small booklets, others simply a single sheet of paper. Anne Lister records in her diary how at St Winifred’s Well ‘a woman there (at the well) – gave each of us a glass of water & a printed sheet of paper account of the spring for which I gave her 6d & she certainly was not satisfied.’ (25 July 1822)

Examples of early 19th-century broadsheets similar to those Anne and her aunt would have received. Reproduced courtesy of Flintshire Archives (D-DM/955/2/22 & PR/A/4)

On tour in Wales a few years earlier Jonathan Gray took an interest in a poem which he found pasted on their bedroom door at the inn at Beddgert. He transcribed it into his journal and noted:

It is in print, & dated the 11 Augt 1800. It is, therefore, new & I am the first lucky journalist who had laid hold on it to swell & adorn his page. Warner [author of Walks Through Wales] would have bounced with rapture at the sight of it, but to him the sight has been denied. What is more remarkable, it has only been here since yesterday morning. A lady who called yesterday, a friend of the author’s pasted it up, & we are the first who have seen it. We enquired of our Snowdon guide who confirms the assertion, that the tradition of the greyhound is current in this neighbourhood. He says that country people shew a stone which they believe to be the tomb of Gêlert.’ (26 August 1800)

Less direct encounters with everyday texts are also noted by Jonathan Gray and Anne Lister in their journals, suggesting they were particularly alert to printed material. For Anne Lister posters could provide useful information on the locality. At Glasgow, she derives information about the depth of the River Clyde from a notice posted on the premises of the humane society (9 June 1828). (The Society was founded in 1790 and still exists today to promote water safety).

Her attitude to the printed matter she encounters on tour is in line with her attitude towards record-keeping and education – her diaries are packed full of all sorts of information about her life and show she read widely and wished to attain a rich and full education in classical literature, mathematics and languages. Jonathan notes texts which strike him as unusual in some way. At Kenmore he considers the notice on a church door to be of interest because it is written in Erse (i.e. Gaelic). Tradesmen’s adverts and signboards also amuse him.

At Alnwick, on their way north, he writes:

There are two gate ways to this town, one of them very handsome with a tower & a crown at the top similar to that at St. Nicholas’, Newcastle. We were struck with a board over the door – “Work of all kinds done by Wm Nixon.”

At Glasgow, he notes:

The shops have in general the articles of their trade painted on the top of the shop door. The trades of the people in some places described in a manner unintelligible to Englishmen. One man is a change keeper & horse seller.

Perhaps, the detail that I find most intriguing, however, is his comment that at Moffat the playbills are handwritten – ‘as at Inverary they have no printing office, & the bills are manuscript.’

I would be fascinated to know whether any such playbills still survive. I imagine that very few do because the survival of printed ephemera probably relies largely on printers’ archives. The only example from this period I could find online is an amateur production held aboard the British prison ship, the Crown, held by the National Maritime Museum. For an image of this handwritten poster see this article in the journal of comparative literature Inquire.

Jonathan’s comments on signs and posters are indicative of the eclectic and light-hearted tone of his tour journals. Travel writing often blended history, antiquarianism, aesthetics, and anthropology but Gray’s omnivorous attitude to travel writing also seems to reflect his own interests. Later in life he would take an active role in local cultural and scientific institutions such as the Yorkshire Philosophical Society, and develop interests in architecture, astronomy, and music. He was also involved in the establishment of the Yorkshire Gazette.

Travel writing has always had a role in providing evidence of material culture (such as costume, domestic interiors, and traditions). Much of my research questions whether travelogues always reflect the author’s on-the-spot observations. The insights into the consumption of print in Gray and Lister’s journals, however, have made me think again about how travelogues are valuable both for the information they contain and what they reveal about the preoccupations of individual travellers and the wider culture to which they belong. I am inclined to think Jonathan Gray and Anne Lister’s comments are unusual and linked to their personalities and particular motivations for travel. However, I would be interested to hear from other researchers who have found similar attention to print culture in pieces of travel writing which they have studied.